UNESCO Chair Fellow Fr. Joseph Tham gave delievered two bioethical talks during his visit to the Universidad Franciso de Vitoria in Madrid Spain July 3-4.  Tham addressed the European Society for Person Centered Healthcare in his conference on “Person-centered Healthcare according to the Catholic Tradition.” Tham’s own abstract of the talk is included below.

Tham also commemorated the legacy of the late Dr. Edmund Pellegrino in an address to the Institute of Bioethics entitled “Testimony on Dr. Pellegrino, virtuous man and educator who lived what he preached.” Tham’s original Spanish abstract of the talk can be found below, followed by an English translation.

“Person-centered Healthcare according to the Catholic Tradition” Abstract

It is a little known fact that hospital is a Catholic invention.  In the Roman times, Christians in hiding began caring for those who were injured, solders and gladiators alike.  When Christianity became legal, they began to extend this care for the sick in houses of “hospitality”, which means places for strangers or guests.  This tradition was carried on in the monasteries for pilgrims, the poor and the sick, and later the foundation of hospitals and medical schools.  The core value of Catholic hospitals  is that of love or charity in action which is derived from the Gospel demand, “Whatever you do to the least of my brothers, you did it to me.”

This means there is a special emphasis on the patient as a person.  This understanding of the person is based on a philosophical vision of man and enlightened by faith.  Hence, the centrality of the value of the person means that he has an intrinsic dignity from conception to natural death.  There is an on-going debate on the identity and moral status of the human embryo today.  However, it is clear in Catholic teaching that the very possibility that we are dealing with humans, even in their earliest stage of development, means that we must respect them as one of us.  Indeed, every one of us has at one point been an embryo.  The patient as a person also means we need to respect his and her dignity in all aspects of life.  This is especially important with regards to the areas of sexuality and procreation.  The Church’s teaching regarding abortion, family planning, sterilization, artificial fertilization and euthanasia are very clear and consistent.  It is important the Catholic hospitals fully share this vision and actively promote it not only as some prohibitions, but as positive safeguarding of our common human dignity.

One challenge all over the world is that the modern hospital has become very sophisticated and requires professional financial management.  This sometimes means closure of services, opening more profit-oriented ones, merging with secular hospitals or receiving government funding.  All these can at times enter into conflict with person-centered healthcare of serving the poor and the disadvantaged.   This is related to another challenge comes from the fact that the scientific technical aspect of medicine is deemed more important or even incompatible with the humanistic or spiritual mission of caring and hospitality.  Hence, the success of a hospital is measured in terms of size, technology and cure rates rather than compassionate care towards the patient’s integral needs.  Finally, there is a diminishment of the presence of chaplains, priests and religious in the hospital which further dilutes this Catholic identity.

I had the great grace of doing my doctorate under the direction of Dr. Edmund Pellegrino. He was a great educator and promoter of personalist ethics based in the aristotelic-thomistic tradition of thought. In my various dealings and encounters with this great man, he enlightened me more with his example that with his writings. Since antiquity, it has not been easy to answer the question “How are the virtues taught?” Dr. Pellegrino left us a clue. He lived the virtues that he taught and spread them with his way of life.

Two hundred and fifty participants from Argentina, Brazil, Canada, China, Cuba, Italy, Mexico, United Kingdom and United States gathered for the event in Palco Hotel in La Habana, Cuba.  During the three days congress, 80 papers were presented and discussed under the direction of Professor Giuseppe Bersani (La Sapienza University, Rome) and Professor Pedro Valdés Sosa (Cuban Neuroscience Center, Cuba).
Fr. Carrara was one of the two moderators of the final day’s plenary session dealing with “Bioethical Issues in Psychiatry and Neurosciences,” and also delivered the lecture titled: “Neurobioethics and human person.” Fr. Carrara spoke on the importance of neuroscience research in order to clarify some anthropological concepts and therefore provide a more profound definition of human person. His lecture was organized according to six main points.
1. Introduction to neuro-centrism and neuro-mania

3. From Neuroscience to Neurobioethics

5. The Human Person considered from the neuroscience point of view

6. Some conclusions related to the neuro-anthropological vision of human being. 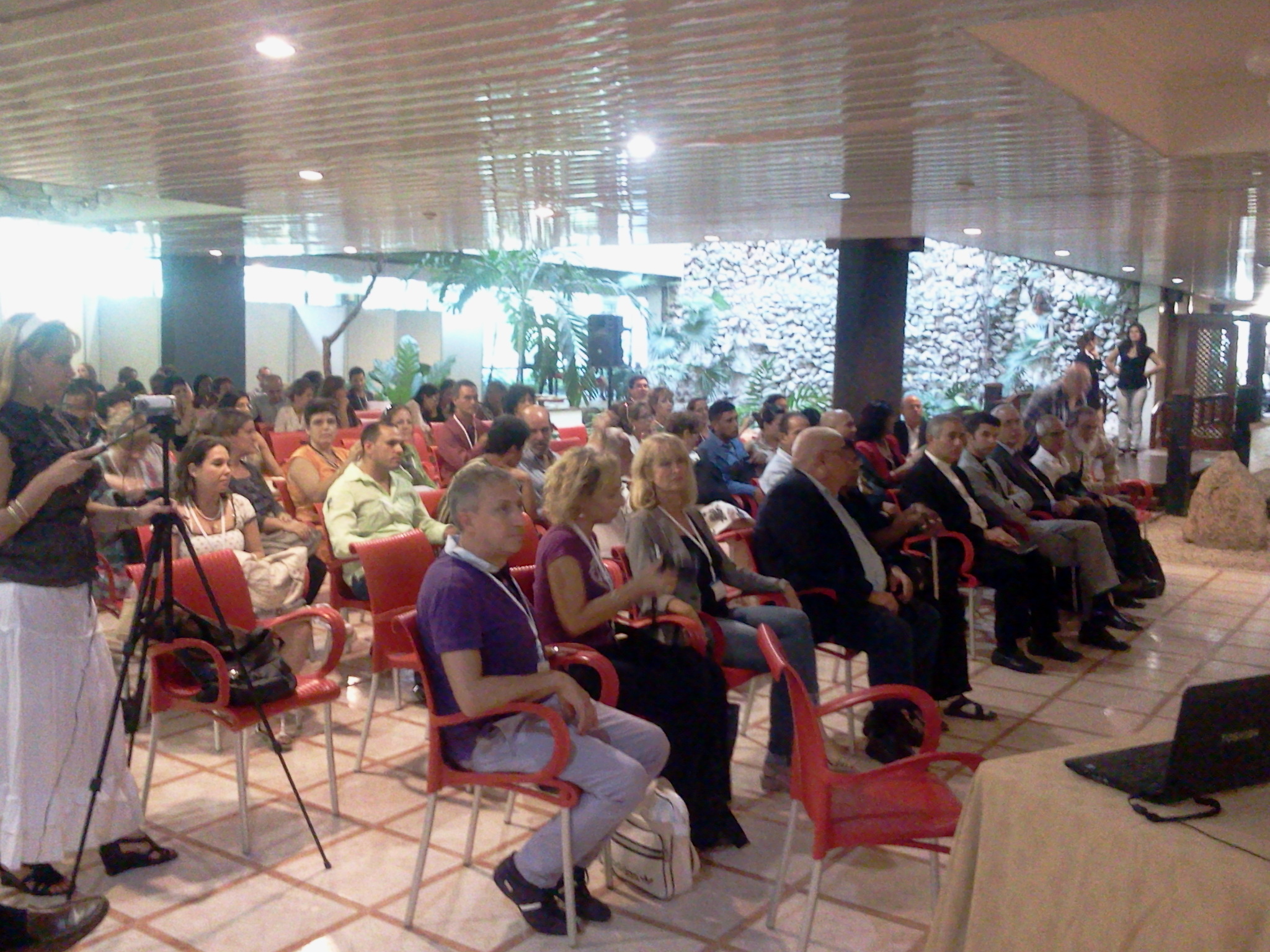 Prof. Fr. Alberto Carrara, LC, Fellow of the UNESCO Chair in Bioethics and Human Rights and Coordinator of the Italian Research Group in Neurobioethics (GdN) participated in the 7th Annual Meeting – Pisa Days of Psychiatry and Clinical Psychopharmacology titled: Psychiatry: time for change, which took place in the Galilei Hotel in Pisa (Italy) on June 16-18, 2014.

Prof. Carrara gave a plenary lecture dealing with the contemporary application of neuroscience in psychiatric practice, with a particular focus on psychiatric patients as vulnerable members of society. The lecture was titled: Neuroethics in Psychiatry, and took place on June 18, 2014, at the end of the meeting.

Carrara noted that psychiatry has greatly changed with the advances in research. The remarkable increase in neuroscientific research in recent decades has corroborated the notion that “mind” and “brain” largely correspond and that psychiatric symptoms also result from brain disturbances. Neuroscientific research has opened new horizons to psychiatric interventions, thanks to the development of treatments such as psychotropic drugs.  Today we can affirm that we know much about the pathophysiology of mental disorders, we can control most psychiatric disorders and symptoms and, in an increasing number of cases, we can even restore normal equilibrium. Likewise, psychological practice has become more scientifically-oriented with some techniques showing reliable effectiveness, to the point that the combination of both drugs and focused psychological treatment can be decisive in some patients.

Moreover, diagnostic instruments have become more accurate and more widely applied: They constitute a sort of common language that undergoes continuous refining on the basis of bedside feedback and the ever-growing support of biological findings.

Although it is true that the mind is rooted in the brain and that the understanding of the brain in molecular terms will promote great advancements, it is also plausible that the mind is something more complex, escaping even our current attempts to define or delimit it. Although we can dissect psychiatric disorders into distinct symptoms or symptom clusters to understand better their molecular and/or neurological bases, such progressive dissecting of complex phenomena will not lead us to reach the fundamental point of Psychiatry.

Indeed, at this point, we need to incorporate all data deriving from neuroscientific research (which cannot be neglected nowadays even by the most traditionally-oriented psychoanalysts), into more exhaustive and comprehensive models, including the challenges deriving from the environment. Psychiatry is a discipline which is linked to and, at the same time, is the reflection of social urges, demands, problems and fears, to such a degree that the individual may be considered as the result of a constant interaction between brain and environment.

For these reasons, in his lecture Prof. Carrara proposed a proper anthropological vision that could help psychiatric clinics and operators in order to prescribe not just the optimal treatment of mental disorders to the restoration of a deranged brain equilibrium, but also to consider its social component and, consequently, the effects that a single individual may have upon society.

We must therefore look for other ways of thinking about the brain, the mind, its functioning and disturbances, so as to start courageously propose new hypotheses that go beyond the currently accepted paradigms. 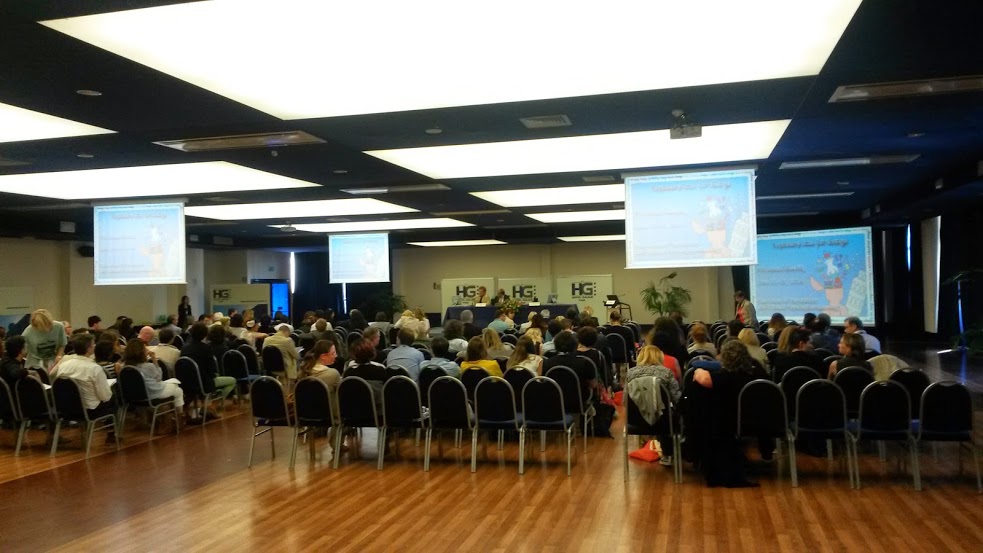 UNESCO Chair Fellows Participate in the 4th European Conference on Religion, Spirituality and Health in Malta

Prof. Fr. Joseph Tham, LC and Prof. Fr. Alberto Carrara, LC, Fellows of the UNESCO Chair in Bioethics and Human Rights participated in the ECRSH14, the 4th European Conference on Religion, Spirituality and Health that took place in the Mater Dei’s Hospital in Malta Island From the 22nd to the 24th of May 2014.

The conference, organized by Prof. Dr. Donia Baldacchino (Educating Health Care Professionals on Spiritual Care, University of Malta), focused on the integration of religion and spirituality into clinical practice. The keynote speakers approached the topic from their specific professional background. The Malta Lecture was held by Prof. Harold G. Koenig, an expert in this field from Duke University Medical Center, Durham, NC, USA.

The ECRSH14 was sponsored by the Research Institute for Spirituality and Health, Langenthal/Switzerland, in collaboration with Malta University, and was titled: Integrating Religion/Spirituality into Clinical Practice: Focus on Health Care Professionals.

Prof. Fr. Joseph Tham, LC and Prof. Fr. Alberto Carrara, LC also met Malta’s President during the opening congress event on the 22nd of May in the Presidential House (see image below). 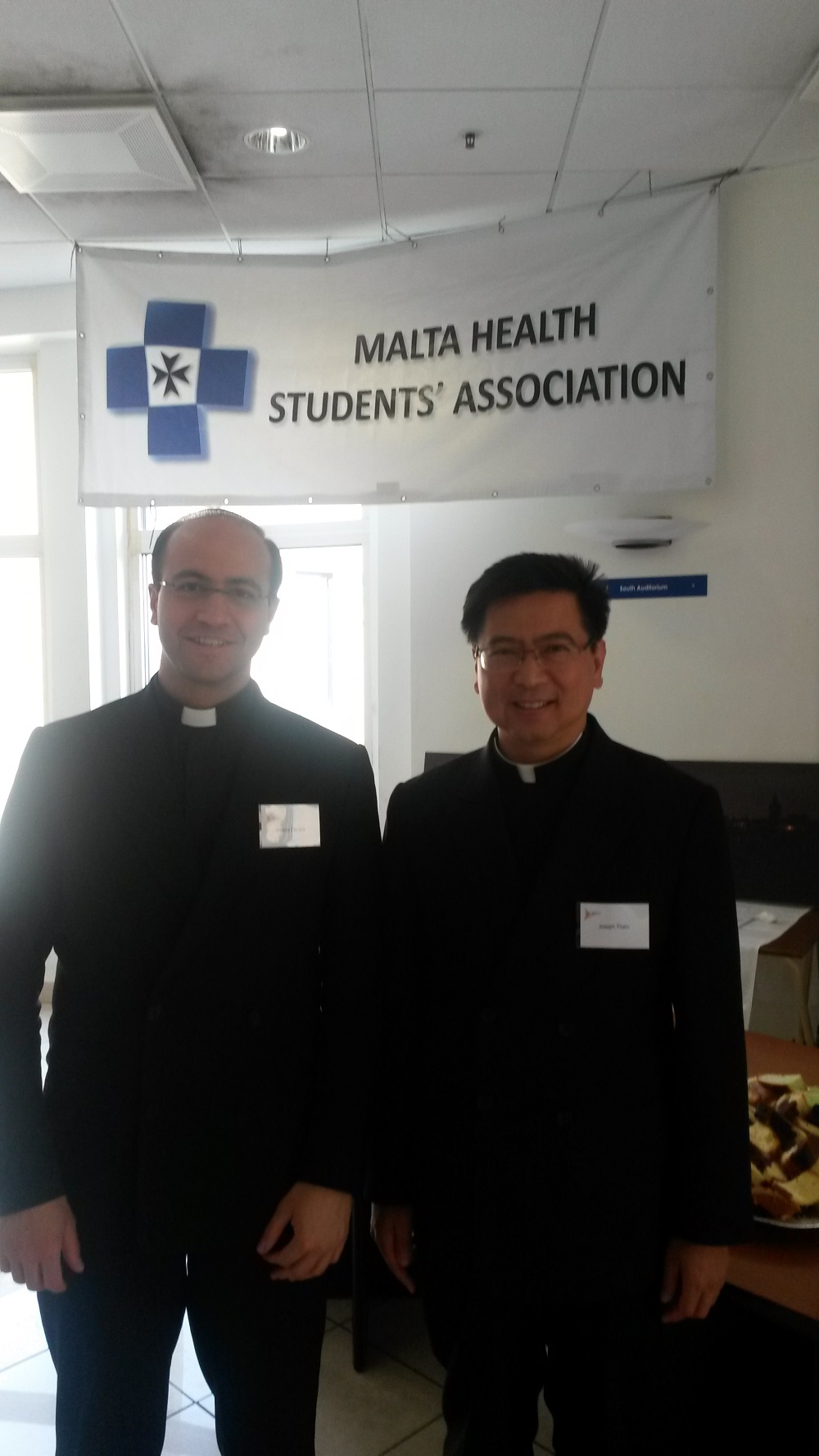