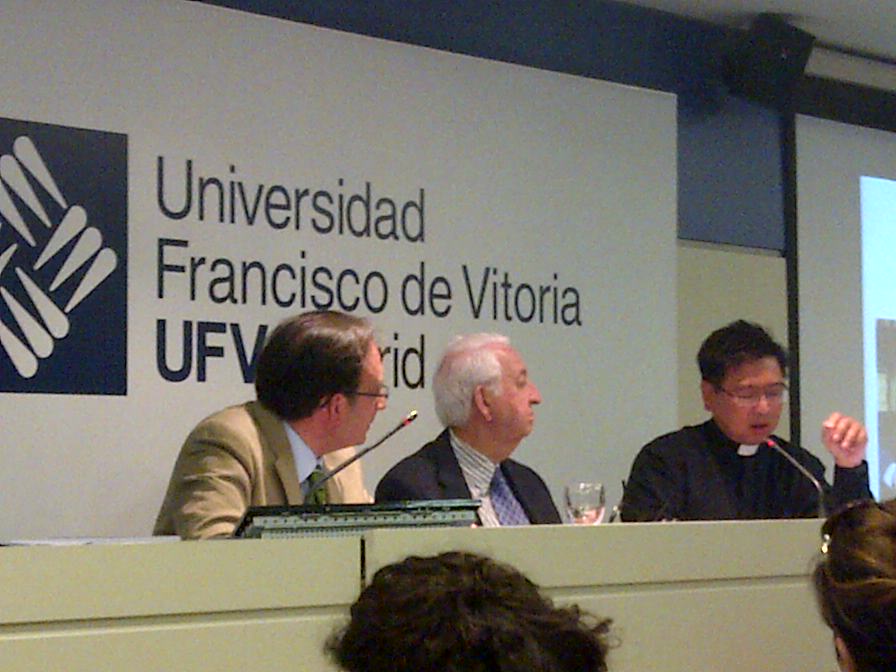 UNESCO Chair Fellow Fr. Joseph Tham gave delievered two bioethical talks during his visit to the Universidad Franciso de Vitoria in Madrid Spain July 3-4.  Tham addressed the European Society for Person Centered Healthcare in his conference on “Person-centered Healthcare according to the Catholic Tradition.” Tham’s own abstract of the talk is included below.

Tham also commemorated the legacy of the late Dr. Edmund Pellegrino in an address to the Institute of Bioethics entitled “Testimony on Dr. Pellegrino, virtuous man and educator who lived what he preached.” Tham’s original Spanish abstract of the talk can be found below, followed by an English translation.

“Person-centered Healthcare according to the Catholic Tradition” Abstract

It is a little known fact that hospital is a Catholic invention.  In the Roman times, Christians in hiding began caring for those who were injured, solders and gladiators alike.  When Christianity became legal, they began to extend this care for the sick in houses of “hospitality”, which means places for strangers or guests.  This tradition was carried on in the monasteries for pilgrims, the poor and the sick, and later the foundation of hospitals and medical schools.  The core value of Catholic hospitals  is that of love or charity in action which is derived from the Gospel demand, “Whatever you do to the least of my brothers, you did it to me.”

This means there is a special emphasis on the patient as a person.  This understanding of the person is based on a philosophical vision of man and enlightened by faith.  Hence, the centrality of the value of the person means that he has an intrinsic dignity from conception to natural death.  There is an on-going debate on the identity and moral status of the human embryo today.  However, it is clear in Catholic teaching that the very possibility that we are dealing with humans, even in their earliest stage of development, means that we must respect them as one of us.  Indeed, every one of us has at one point been an embryo.  The patient as a person also means we need to respect his and her dignity in all aspects of life.  This is especially important with regards to the areas of sexuality and procreation.  The Church’s teaching regarding abortion, family planning, sterilization, artificial fertilization and euthanasia are very clear and consistent.  It is important the Catholic hospitals fully share this vision and actively promote it not only as some prohibitions, but as positive safeguarding of our common human dignity.

One challenge all over the world is that the modern hospital has become very sophisticated and requires professional financial management.  This sometimes means closure of services, opening more profit-oriented ones, merging with secular hospitals or receiving government funding.  All these can at times enter into conflict with person-centered healthcare of serving the poor and the disadvantaged.   This is related to another challenge comes from the fact that the scientific technical aspect of medicine is deemed more important or even incompatible with the humanistic or spiritual mission of caring and hospitality.  Hence, the success of a hospital is measured in terms of size, technology and cure rates rather than compassionate care towards the patient’s integral needs.  Finally, there is a diminishment of the presence of chaplains, priests and religious in the hospital which further dilutes this Catholic identity.

I had the great grace of doing my doctorate under the direction of Dr. Edmund Pellegrino. He was a great educator and promoter of personalist ethics based in the aristotelic-thomistic tradition of thought. In my various dealings and encounters with this great man, he enlightened me more with his example that with his writings. Since antiquity, it has not been easy to answer the question “How are the virtues taught?” Dr. Pellegrino left us a clue. He lived the virtues that he taught and spread them with his way of life.