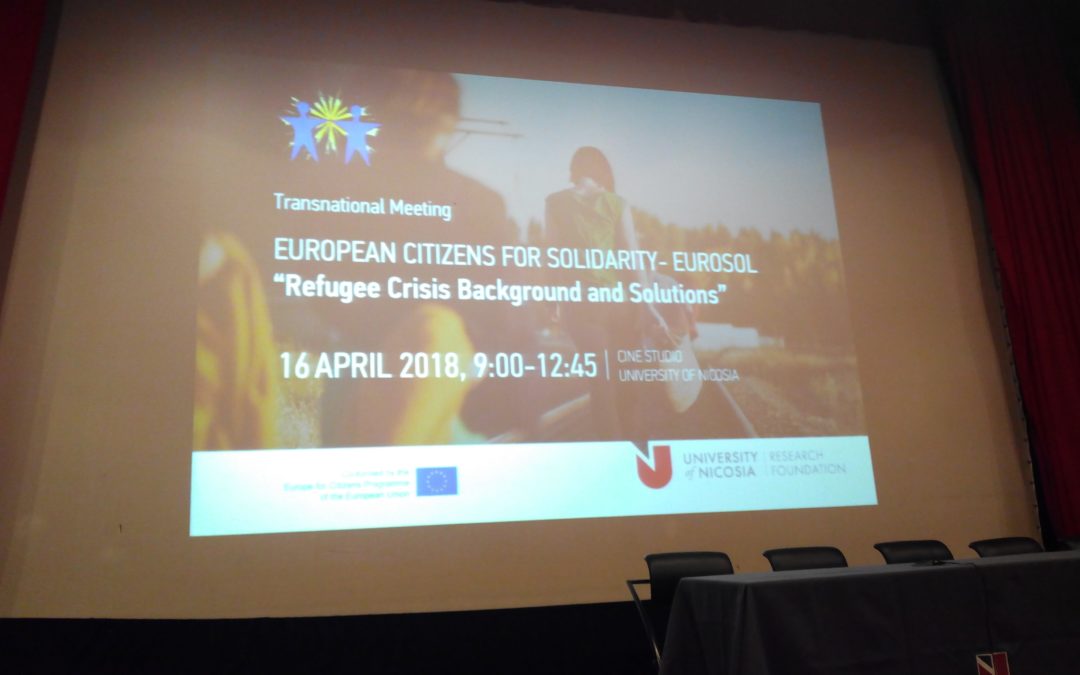 According to the Cyprus Mail Online, an average of 70,000 people trying to escape the war zones reaching Europe have been stuck in Cyprus, Italy or Spain. These countries share a common path: huge waves of migrants, refugees, asylum seekers who want a better life and thus risk everything they have, even their own life: “It is better to die in the sea than in the desert.” – Mohamed 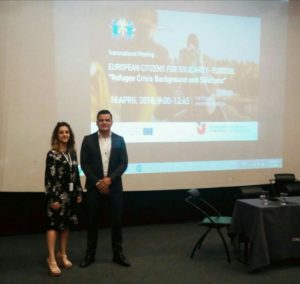 Since last March representatives of these countries along with UK, Bulgaria, Poland, and Lithuania have been gathered to discuss the migrants’ and refugees’ situation within the EUROSOL project funded by the EU.

On the 16th April, the UNESCO Chair collaborators Serena Montefusco and Kevin Ramirez took part in the conference organized by the University of Nicosia Research Foundation, Cyprus, entitled “Refugee Crisis Background and Solutions” with the European Citizens for Solidarity (EUROSOL) project. Once again the eight partners of the EUROSOL project, including UNESCO Chair, gathered together to discuss the refugee crisis that the European Union (EU) is facing, specifically Cyprus. 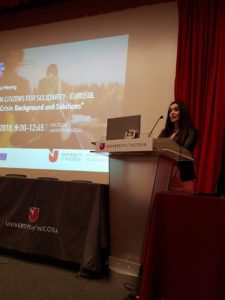 After the introduction and greetings by the Rector of the University and the explanation of the progress of the project by the coordinator Clara Ubeda, the day of discussion developed in four different sessions: 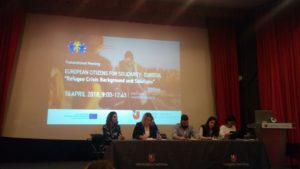 UNESCO Chair collaborator, Serena Montefusco was involved as a moderator in the first round table in which students of the Faculty of Law presented on the principle of non-refoulement. The three students analyzed both the right to asylum and the principle of non-refoulement under the European law.  Giving an overview of the laws, protocols, regimes implemented by the EU it was possible to argue how the law is not transparent and distant from the actual reality. In other words, there are many laws that regulated the right to asylum that are not always clear and followed neither in their integrity nor partially. This concept was confirmed by Montefusco when presenting her collaboration with an NGO (ASCS – Associazione Scalabriniana alla Cooperazione e Sviluppo) in Italy that develops social inclusion programs in favor of migrants and refugees. Presenting the role that the UNESCO Chair has in this project, she also referred to her volunteering experience collected with migrants and refugee in both Rome and South of Italy where the level of exploitation and corruption is extremely high. The round table was moderated not only by Montefusco, but also by Emilia Strovolidou (UNHCR, CY) who gave another detailed perspective of the refugees’ situation in Cyprus. The numbers are frightening considering how many people have been stuck in both Italian and Cyprus coasts and shelters not allowed to obtain the refugee status or threatened to be send back to their country of origin. As pointed out by the psychology students, migrants and refugees face different types of traumas at the different stages of their journey. 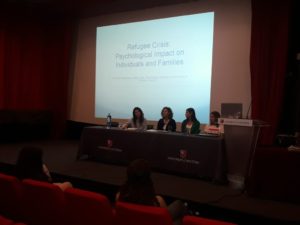 The second round table, moderated by Asya Rafaelova-Eneva of the Altius Francsico d Vitoria Fundation (Spain) and Bistra Choleva-Laleva of BIDA e.V Kultur un Bilding (Germany), one of the eight partners of the EUROSOL projects, analyzed, thanks to the Psychology students, the psychological impact that being an immigrant might cause to individuals and family. Indeed, there are a lot of studies that have seen that these people are affected by PTSD that cause panic attacks, depression, difficulties in maintaining relationships, suicidal thoughts, sleeping problems and others. These students presented three different cases of three Somalian girls who were affected by these symptoms due to the tremendous journey that they take to reconcile with their families in different parts of Europe. In cases of traumas, not only the work of psychologists is fundamental to get through the fears, but also social workers play a crucial role in the process of a successful social inclusion. 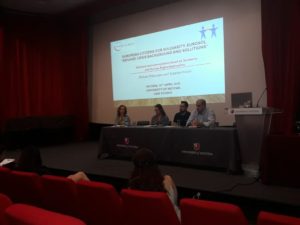 The third round table moderated by the University of Nicosia Research Foundation Director Stefanos Spaneas and Beata Palac, representative of the Poland partner within the EUROSOL project, presented the impressive work and the role of social workers in refugees related matters. Students of the social work program at the University of Nicosia emphasized the importance of values such as freedom, dignity, equity, and solidarity and rights such as the right to education, work and to have a house. Social workers promote the mutual integration among locals and migrants through a multidisciplinary work (psychologist, lawyers, interpreters, …) to ameliorate the migrants’ situation providing them training courses to find better jobs position to give back to society. 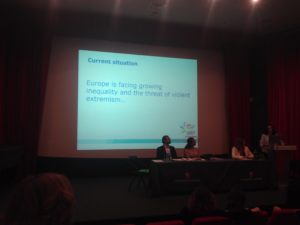 The last session was dedicated to discussing possible solutions and to analyzing some programs that are already implemented and that are better the life of many. Introduced by Dr. Despina Cochliou, the representative of the Erasmus Plus program, the program could share the language courses that the European Union is providing for free. As well known, the knowledge of the local language when one is forced to move to another place is fundamental. Many people in the audience did not know that funds are not only implanted in Cyprus but also in other different countries. Thus, it seems that the European Union needs to improve the way the news is spread. Yet, it is reassuring that there are people that dedicate their lives to this type of work that informs migrants that there are possibilities and accessibility to these programs. Next, Dr. Despina Cochliou introduced an NGO named AWARE (Cyprus) which is a communication and counseling agency which is committed to raise awareness of refugees related matters. They own a constantly updated website and active profiles on social media allowing the share of the latest news and  connection among different ethnical groups. The session concluded with the testimony of two refugees that had the possibility to recreate their life in Cyprus. They are both well-educated Syrians, one of whom is working as a leader, mentor and life coaching and the other of whom obtained two bachelor’s degrees in Law Banking and Economics. For privacy reasons, I am not sharing their names, but they serve as an example of a successful social inclusion.

The UNESCO Chair in Bioethics and Human Rights that bases its values ​​on the 15 points of the Universal Declaration of Bioethics and Human Rights (2005) has the responsibility to pursue the safeguarding of human rights in the recognition of the dignity of both locals and migrants through interreligious and multicultural dialogue. Since 2009, the Chair has been committed to achieving the objectives established since its foundation: promoting the art of convergence and cooperation in global ethics through its areas of interest that allow a continuous dialogue between experts on bioethics principles.