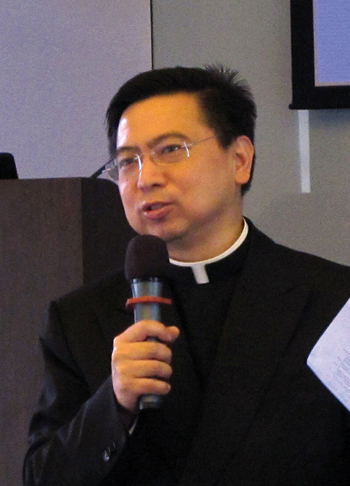 UNESCO Chair Fellow Fr. Joseph Tham, LC participated in a conference on  “SARS epidemic: ethical reflection and prospects” in Hong Kong on September 7, 2013. The 2003 global epidemic of severe acute respiratory syndrome was particularly devastating in Hong Kong.  About 1800 people were infected, 300 of whom died, including 8 medical personnel.  The Bioethics Resource Centre of the Catholic Diocesan Committee for Bioethics of Hong Kong organized the education event with the sponsorship of different hospitals, nursing and doctor guilds.
Fr. Tham spoke on the challenges medical personnel face in risking their own lives to save the lives of those suffering disease.   He organized his presentation according to four major paradigms of the doctor-patient relationship used to understand healthcare delivery to SARS victims.
Military– Doctors and nurses are considered front-line soldiers defending the citizens from the plight of the SARS disease.  They see themselves as specially trained to win this battle against the enemy, and sometimes have to sacrifice themselves in this struggle.
Profession– This model emphasizes the duty of physicians and nurses to serve the public. In emergency situations, similar to police or firefighters, abandonment would be considered unacceptable and violate the code of professional conduct.
Legal / Business– Here, the relationship becomes one of provider and client, bound by a reestablished contract, with tendency towards utilitarian calculation and possible lawsuits. In this scenario, healthcare workers may opt not to put themselves and their families at risk.
Vocation / Mission–  Doctors and nurses receive a special calling and their duty is not merely professional but also something more. According to Edmund Pellegrino, this would constitute a covenant relationship in which virtues are required. The virtues of justice, prudence, fidelity to trust and self-effacement would be particularly important.
Tham´s talk concluded by addressing the risk-benefit assessment involved when healthcare professionals are asked to treat the SARS victims according to the fourth paradigm. He emphasized the primary importance of prudence in this model and explained the components of the virtue essential for arriving at correct decisions.
Tham will also be teaching in a bioethics diploma course at the Caritas Institute of Higher Education during his visit.