The creativity of artifacts: oxymoron, paradox, or a new frontier?

The seminar presented by Professor Maria Addolorata Mangione, MD, PhD is part of the third specialization course in Neurobioethics organized by the Research Group in Neurobioethics of the UNESCO Chair in Bioethics and Human Rights. The seminar is characterized by a specific identity that addresses the implementation of artificial intelligence in the artistic field. It offers a reflection that combines sociology and philosophy to guide the application of artificial intelligence to the arts.

The expertise of artificial intelligence is exponentially improving. Digital systems have been equipped with increasingly sophisticated techniques for the analysis of situations of different orders and can reveal patterns even unknown to the human mind. In addition, these operations are carried out at speeds that exceed our cognitive abilities. We have gradually assigned a new position and a new vocation to digital technologies and their promises: that of enunciating the truth. This change has quickly led to an altered anthropomorphism driven by the continuous attempts to emulate human cognitive faculties and transcend their limitations. The phenomenon, however, remains fragmentary. Rather than accept the totality of human abilities and faculties, artificial intelligence is only concerned with the reproduction of specific tasks.

Artificial intelligence applications are being increasingly adopted to aid human decision making. Although AI has the concrete potential to improve human life and activities in countless ways, its implementation depends heavily on the trust placed in its performance. Human trust in technology is based on our knowledge of how these systems work and our assessment of their safety. To trust judgments based on algorithms, we must make sure that these are accurate and rational as well as safe and ethical. In this context, the Neurobioethics group of the UNESCO Chair in Bioethics and Human Rights aims to provide answers to difficult ethical questions on the role of artificial intelligence and its relationship with humanity and society.

Aesthetics and art are apparently very far from those issues that directly involve the reality of existence. At the same time, however, these disciplines extend to a border area, namely the world of symbolic and mythical productions. The advent of artificial intelligence and algorithms in art meets a blank canvas, leaving ample room for a range of almost infinite possibilities. Despite the ability of technology to perform the purely procedural aspects that characterize a specific form of art, AI is not yet able to reproduce the genius and creative flair that characterizes each artist when committed to the creative process. 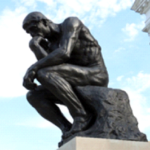 Rodin’s The thinker recalls that integral anthropology to help us shed light on a universal path for the elaboration of our reflections. It is a muscular figure, in which great attention has been given to the definition of the details of muscle tension. Rodin’s stylistic choices underline the close link between the intellectual activity and the body of the person, therefore the substantial union between the spiritual or intellectual soul and the body. Rodin’s The thinker reminds us that the person is the totality of body and spirit and cannot be traced back or reduced to one dimension.

Figuratively speaking, in 1967 Roland Barthes suggested that “the reader’s birth should be redeemed by the author’s death.” As artificial intelligence takes its first steps in narrative writing, Barthes’ metaphor might one day become a reality. An interesting project undertaken by Philip M. Parker, Marketing professor at INSEAD Business School, perfectly illustrates the literary applications of AI. Parker’s invention consists of a computer program capable of writing books on different topics in about 20 minutes. So far, hundreds of thousands of books have been created by the patented algorithm with Amazon listing over 100,000 books attributed to Parker’s business and ICON Group International Inc.

The system automates the writing process by creating information databases and identifying templates for the information to be packaged in the form of a coherent text. Since digital e-books and print-on-demand services have become very popular, topics can be listed on Amazon without being “written” yet. The system’s success (and cleverness) relies on the artificial emulation of the human literary process. Typically, this would have been done by several experts for each given subject requiring an exponentially higher amount of time and resources, all factors that are cut down to zero through Parker’s technology.

This prompts us to the question: can artificial intelligence produce creative works like a human being? Although a novel is a work of fiction, it is no secret that some genres lend themselves to predetermined formulas, such as romance novels. On the one hand, a novel written by an AI system would maintain its ultimate aim of entertaining the reader. On the other hand, to express not only original but deep personal content, investigations of a sociological statistical nature are not sufficient; what is necessary is a profound knowledge of the human soul and the dynamics of social relations. The very nature of human experience is found in literature, often represented as a crystallized emotion. The interest in AI is, therefore, reformulating the ongoing debate on what it means to be human, questioning our concepts of personality, imagination, and knowledge. AI is both the apotheosis of the logical scientific reasoning of the Enlightenment and, perhaps, also its damnation. 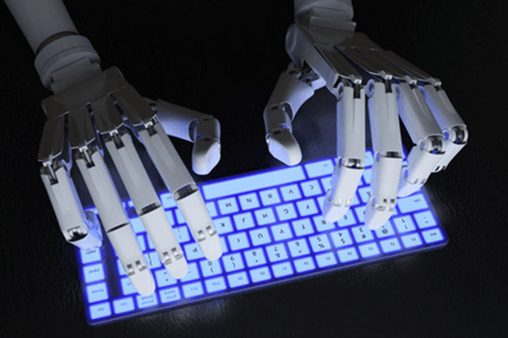 From the teardrop drawings of Pollock to Warhol’s pop art, artists have always been searching for new ways to advance their creativity. It could be argued that removing the human being from the artistic process could open up a new frontier of art where AI plays a central role for the overcoming of artistic obstacles. This new frontier of art, of course, opens the door to many philosophical debates about the concept of inspiration, experience, and copyright. The advent of AI in art could lead to a radical change in artistic and imaginative thought. Moreover, in an artistic environment dominated by artificial intelligence, it could be challenging to identify an exact creator. Although ethically dubious, this phenomenon opens the door to a future in which our imagination may no longer be the obstacle to the creation of art.

Harold Cohen, a former artist, and professor of the University of California of San Diego, started working on an artistic creation program called AARON in 1973, while he was a scholar visiting the Stanford University Artificial Intelligence Lab. AARON’s ability to paint has improved year after year, learning more difficult and complex techniques from its creator. AARON learned to place objects or people in 3D space in the 1980s and was able to paint in colour from 1990 onwards. AARON does not paint with pixels, but through a machine that allows him to mix the paint and to obtain still lifes and portraits of human figures without photos or other human inputs as a reference. Over time his paintings have made their way into many of the world’s major art museums and into the hands of private collectors at the cost of hundreds or even thousands of dollars.

If AARON has the potential to represent the future of art, the Ai-Da project appears even more futuristic. Defined as “the world’s first ultra-realistic humanoid robot artist” by its creator Aidan Meller, Ai-Da can draw creatively thanks to its integrated artificial intelligence (AI) technology. This production is possible thanks to its ability to receive visual data through cameras located in its eyes and virtual information processing algorithms that allow the establishment of coordinates for the realization of artistic work. Ai-Da can use a pencil or a pen producing sketches similar to historical drawings by Leonardo da Vinci and Alan Turing.

The Ai-Da project is defined as revealing as its main objective is that of opening a discussion on the relationship between artificial and organic life. The very concept of life opens many debates in the world of philosophy and art. In these debates, the purely biological vision that life can be studied and identified exclusively by scientific and experimental disciplines collides with a multidimensional approach for which various levels of life are identified: animal, human and spiritual. 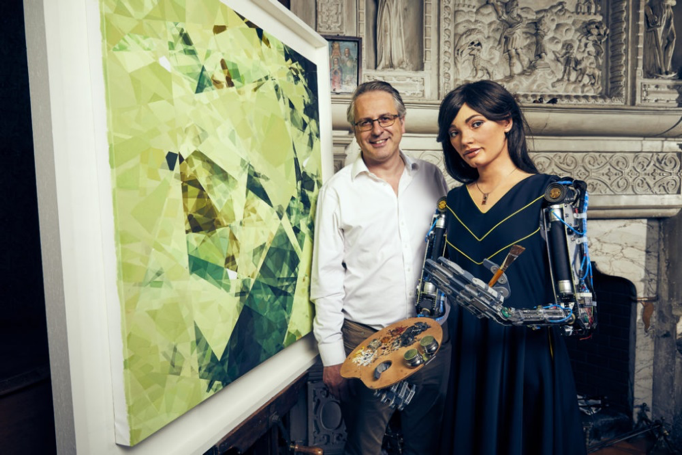 The idea that music can be composed by artificial intelligence is intriguing as daunting to many. AI software for music production has reached such advanced levels in recent years that they have become routine tools used by producers to aid in the creative process. This development raises the question: Could artificial intelligence someday replace musicians?

Despite AI’s apparent novelty, it has long been utilized in music. In 1976 Ray Kurzweil presented a machine that could read the text on a page and pronounce the words aloud on the NBC Today show. The device was originally designed for the blind, but over time it became an innovative musical instrument based on artificial intelligence models. Kurzweil’s K250 synthesizer debuted in 1984 as the world’s first keyboard input instrument with the ability to generate the sounds of various acoustic instruments. Later, in the 90s, David Bowie helped develop an app called Verbasizer, capable of processing literary material and randomly reordering it to create new text combinations. While in 2016, Sony researchers employed a software called Flow Machines to create a Beatles-style melody, which was later used by composer Benoît Carré for the development of a pop song called “Daddy’s Car.”

The impact of these developments will profoundly affect all human endeavours, including music. Music will remain the communication of musicians’ emotions and human intuitions to an audience, but the concepts and process of music will undergo a profound transformation. 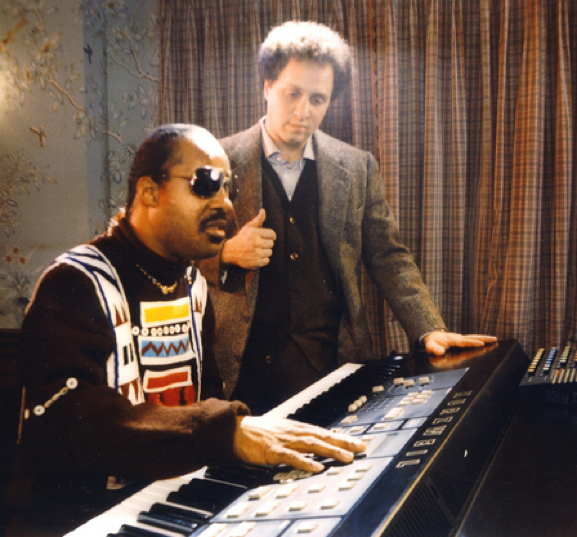