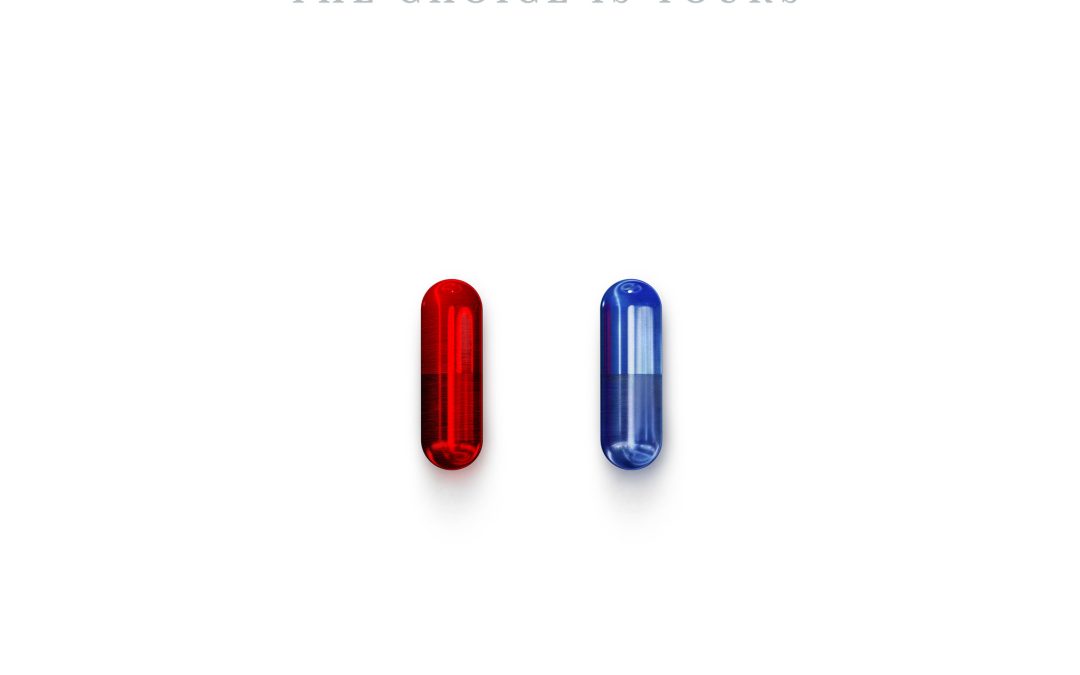 “You take the blue pill and the story ends.

You wake in your bed and you believe whatever you want to believe.

You take the red pill and you stay in Wonderland

and I show you how deep the rabbit-hole goes.”

The Matrix is a media franchise that consists of four feature action films, beginning with The Matrix (1999) and continuing with three sequels, The Matrix Reloaded, The Matrix Revolutions (both 2003), and The Matrix Resurrections (2021). The film is set sixty years after Revolutions and we find Thomas Anderson, alias Neo, as a successful video game developer at a company called Deus Machina. Neo is a suicide survivor gifted with a powerful imagination, constantly on the verge of having a mental breakdown, because of a “splinter in the mind” (again) taunting him that he lives imprisoned inside a computer-generated world. That’s why his therapist is constantly prescribing Neo blue pills, which anchor him ever more to a reality he cannot fully accept. The video game series created by Neo is called “The Matrix” and one of the characters (Trinity) is based on a married woman (Tiffany) with whom he seldom crosses paths at a coffee shop, called “Simulatte”. She is completely oblivious of her past, even if she is not happy with her actual life and is melancholic for something she cannot quite remember. Meanwhile a young hacker named Bugs manages to track Neo down and frees him from the Matrix. Bugs uses a program embodying Morpheus before being caught by Agent Smith, the security system of the Matrix.

The first part of the movie is a kind of meta-narration of contemporaneity, consisting of allusions to, and quotations from, the past Matrix movies that are brought back to life in a double game of revival and reiteration of topics such as choice, the paradox between free will and predetermined destiny, dreams and reality, technoslavery, and the power of true love. The second part of the movie sees Neo and his new “friends” attempt to save Tiffany (Trinity) and try once again to restore to freedom all mankind from the mind imprisonment of the new Matrix.

The self-referential, first part of the film contains a moment of brainstorming of Neo and his colleagues when asked to make a sequel to his original Matrix trilogy. Some of them considered the Matrix series as a metaphor of the capitalist exploitation or to be about trans-politics, crypto-fascism, or simply about mindless action with lots of guns and tacky philosophy. All the participants had something to say about the trilogy. Although they sincerely thought they grasped the trilogy’s true meaning, their assessments were superficial and mocking. Neo felt as never before to be alien to all that was happening or was being said. However, he was soon to be rescued. It is worth mentioning that Neo is the One, the prophesized Savior of humans enslaved by the Matrix, a self-aware artificial intelligence (note the clever anagram of Neo = One). Even though he was convinced to undertake his role only at the end of the first movie after he returns from death through Trinity’s kiss, his chosen name is one of the proofs that he is The One, the Messiah of the new millennium. Thus, he has to undergo once more the path of enlightenment. In this process, we are given all the things that became mainstream after the first Matrix movie: the choice between the red pill and the blue pill, the mirror bending, and Neo following the girl with a White Rabbit tattoo. As mentioned in the film: “Nothing comforts anxiety like a little nostalgia”.

But what exactly is this New Matrix?

The old Matrix was an artificial reality created by machines and designed by the Architect, a system of control. It was a world in which all reality is nothing more than electrical signals sent to the brains. As Morpheus describes it: “a world that has been pulled over your eyes to blind you from the truth.” In fact, the truth is that there are “endless fields where human beings are no longer born; but they are grown” to serve as batteries providing energy to Machines.

The New Matrix, instead, is designed by the Analyst, Neo’s psychotherapist, who studied the human mind in greater depth.  Unlike his predecessor, who concentrated on precision, facts and equations, the new designer realized that for humans, the only world that matters is the interior one. He sees that the only thing that validates and makes human fictions real are feelings. In the Analyst’s words “here’s the thing about feelings. They’re so much easier to control than facts. Turns out, in my Matrix, the worse we treat you, the more we manipulate you, the more energy you produce. It’s nuts”. Therefore, pod-sleeping humans generate more electric power when quietly longing for what they do not have, while dreading losing what they do have in a constant wavering between desire and fear. Lately, troubles, worries, woes and suffering, grief or heartache are ubiquitous feelings due to various socio-economic problems, moral distress, in addition to the pandemic emergency. This set of emotions is perfectly encapsulated by the Yiddish word “tsuris”, a feeling of nervous energy. Indeed, we quickly become exhausted when in pain and sorrow, but feel powerful when happy and fulfilled. What the Analyst does not take into account is the power of true love, the one between Neo and Trinity, an even stronger force than all the misery in which the program pushed their psyches.

In this fourth chapter of the matrix series, there have been some updates like mirror portals and doorways for entering and exiting the Matrix (no more phone booths), synthients (good Machines that collaborate with humans), and a new way of unplugging a body from the Matrix (a brain bypass).

The writers of “The Matrix Resurrections” action film do not take for granted the series legacy and all of the philosophical issues raised in the previous films. They are well aware of the past critiques and the low expectations for yet another sequel of a successful franchise. Nevertheless, once again this science fiction movie provides food for thought, well-seasoned with nostalgia, self-mockery, kung-fu scenes, and updated views on artificial intelligence.

The Research Group of Neurobioethics of the UNESCO Chair in Bioethics and Human Rights has been actively exploring scientific developments in neuroscience, as well as recent achievements made in the field of neurotechnology, with a particular focus on emerging scenarios of the progressive human-technology hybridization. The neuro-technological progress challenges us to an increased awareness of our relationship with technology, invasive and non-invasive systems of neural interface, mind uploading into the network, and mind unplugging from the artificial intelligence (AI). Thus, the Matrix series offers us some plausible future scenarios of the evolution of the “artificially” natural bond between mankind and neurotechnology.

Media is nothing but neuro-trigger response and viral conditioning.

Wait, what are you two talking about?

What we need is a series of videos that we call “The Catrix.””