Eat, Pray And Wash Your Hands 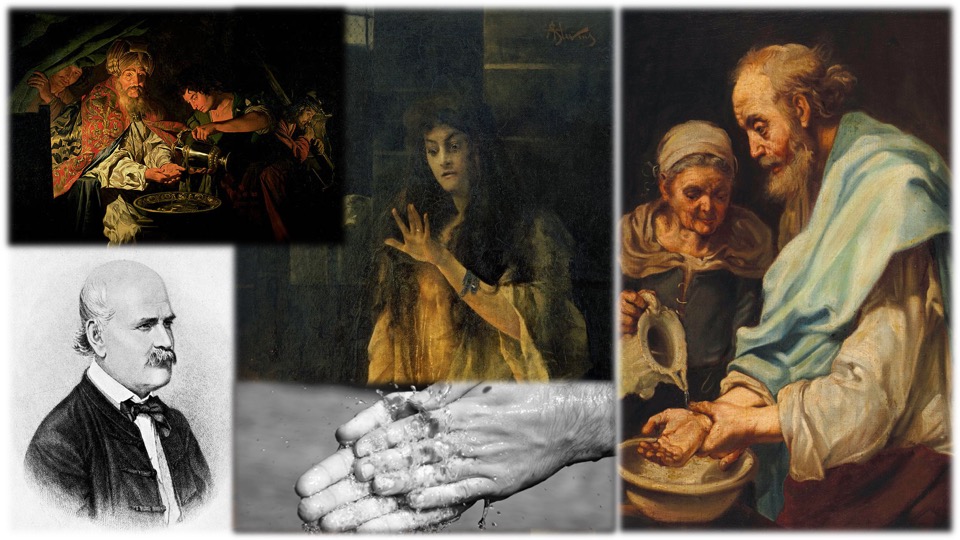 “Thoroughly wash away my guilt; and from my sin cleanse me.”

“Cleanse me with hyssop, that I may be pure; wash me, and I will be whiter than snow.”

Regular handwashing with soap is promoted as an effective approach to disease prevention. Moreover, handwashing has been an important religious and cultural custom for millennia. The link between handwashing and health issues was first made less than two centuries ago by Ignaz Semmelweis, a Hungarian physician and scientist working in Vienna, known today as “the father of hand hygiene.”

In 1846, the Hungarian obstetrician noticed that maternal mortality in his hospital, due to childbed fever also known as puerperal fever, was significantly higher than in similar hospitals nearby. He decided to investigate, seeking differences between the maternity clinics. And soon enough he noticed that doctors and medical students in his hospital often visited the maternity ward right after performing an autopsy. Semmelweis surmised that infectious particles of some kind were being passed from cadavers to women; in fact, puerperal fever is a form of bacteria-caused sepsis, commonly referred to as blood poisoning. Thus, after instructing the students, as well as all the hospital staff, to always wash their hands in a chlorinated disinfecting solution before each examination, the number of deaths plummeted dramatically. Nevertheless, some doctors were disgruntled and angry that Semmelweis was implying they were to blame for the deaths, this would have been admitting that physicians, instead of saving lives and healing patients, were the unwitting cause of so much death. Therefore they refused washing their hands, arguing in support of the prevailing, at that time, belief that water was the potential cause of disease or blaming such diseases on miasma, a kind of toxic atmosphere.

In the end, Semmelweis suffered from severe depression and went mad. He turned every conversation to the topic of childbed fever. He was involuntarily confined to an insane asylum, where he died after two weeks. Later in time, in 1862, he was vindicated by the French microbiologist Louis Pasteur and his “Germ Theory” of disease.

Before the establishment of handwashing as a hygiene practice, physical cleansing has been a pivotal element in various religious ceremonies for thousands of years for either ritualistic reasons during religious ceremonies or for symbolic reasons in specific everyday life situations. A gesture that was previously considered as a religious ritual, a divine precept without rational explanation, had now become scientifically valid and a crucial practice in public health.

In particular, Islam, Judaism, and Sikhism have precise rules for handwashing specified in holy texts, and this practice marks several key moments of the day. For instance, Jewish law and custom prescribe ritual hand washing immediately after awakening in the morning, before and after each meal, before praying, as well as before the beginning of Shabbat. Islam places great emphasis on cleanliness, in fact it is prescribed to repeat ablutions at least 3 times with running water before prayers (5 times/day). The Christian faith gives indication for ritual handwashing before consecration of the bread and wine and the washing of hands after touching the holy oil (the latter in the Catholic Church) (Allegranzi et al., 2008).

Furthermore, beyond the spiritual behavior or a mere physical gesture, handwashing has wider meanings, referring to interior and exterior purity, suggesting a psychological association between bodily purity and moral purity.

The “Lady Macbeth effect” or “Macbeth effect” is a priming effect said to occur when the response to a cleaning cue is increased after having been induced by a feeling of shame or a threat to one’s moral purity. The effect is named after Lady Macbeth, the character in Shakespeare’s play Macbeth; she imagined bloodstains on her hands after she goaded her husband into murdering the lawful king. Scientists studied the “Macbeth effect”, which revealed itself through a greater desire for cleansing products and a greater likelihood of taking antiseptic wipes. In a widely-publicized set of studies, participants who were primed to recall past unethical events preferred cleansing products more than those primed with ethical events (Zhong & Liljenquist, 2006). Several subsequent efforts did not replicate this relationship, not excluding, however, the close association between guilt and atonement by “washing away one’s sins” (Siev et al., 2018).

One of the main areas of interest of the UNESCO Chair in Bioethics and Human Rights is Bioethics, Multiculturalism & Religion, an interdisciplinary project whose mission is the promotion and recognition of the academic and scientific commitment in the field of life sciences and medicine. It highlights the importance of dialogue, creative cooperation and mutual understanding in our challengingly globalized and diverse world.

Today, if we can fight Covid-19, if we have eradicated typhoid and cholera, if the plague is only a disease of the past, we owe it to hygiene and hand cleaning in particular. And therefore also to Ignaz Semmelweis and his intuition. With this in mind, we must not “wash our hands” as Pontius Pilatus did, with the aim of clearing his conscience and rubbing off his share of responsibility for the martyrdom and death of an innocent. Instead, we must courageously assume our share of individual responsibility by reconsidering handwashing as a gesture of love and care for our own health and that of others’.

“Everything is in the hands of man. Therefore, they must be washed often.”