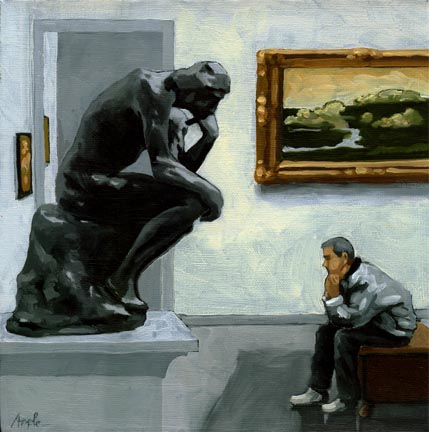 “Reflect, before you think.”

Have you ever wondered about mind-wandering? Curiously we think our brains work less when we are being absent-minded, as if in a “stand-by” mode; nevertheless, recent studies contradicted this impression, demonstrating that our brains are extremely active and energy-consuming especially during our “resting-state” mode (i.e. when non engaged in active tasks). In fact, the Default Mode Network (DMN) is a set of brain regions that exhibits an increased blood-flow, glucose metabolism and oxygen consumption during resting-state and is thought to be activated when individuals are focused on their internal mental-state or “metacognitive” processes, such as self-referential processing, interoception, autobiographical memory retrieval, or envisioning the future. Conversely, DMN is deactivated during cognitive task performances. The specific regions thought to be part of the DMN include the medial prefrontal cortex, the posterior cingulate cortex, the inferior parietal lobule, the lateral and inferior temporal cortex and the medial temporal lobes (Buckner et al., 2008).

Its discovery was an unexpected scientific accident, a consequence of brain-imaging studies. For a long time, fMRI investigators considered that the brain was completely at rest during the control condition when participants lie quietly in an fMRI machine with eyes closed or eyes open fixed on a cross. Images taken under these conditions were considered to be just noise, but they turned out to be more than that. The DMN was originally described by the neurologist Marcus Raichle in 2001, who observed that select brain regions increased metabolic activity during rest and decreased activity when engaged in goal-directed (i.e., cognitively demanding) behavior. DMN activity increases during perspective-taking of the desires, beliefs, intentions and emotions of others (i.e., theory of mind or attribution of mental states to others), in remembering the past (e.g., autobiographical memory), in time-traveling (e.g., planning the future), in moral decision-making, in self-criticizing and other experiences of self (Buckner et al., 2008).

It may be that the stream of consciousness flows through those same key structures of the DMN.  Ever since its discovery, the DMN has been described by various neuroscientists as the brain’s “orchestra conductor” or as an “uber-conductor” that ensures to keep order in a complex system of competing signals. This network is also known as “the me network”, because it appears to play a crucial role in the creation of mental constructs of the self, or “ego”. It’s worth mentioning as well the contribution of the DMN in aesthetic processing. While additional research is needed to better understand this role, it is likely that aesthetically pleasing images are both more evocative and lead to increased internal mentation (Belfi et al., 2018).

DMN-mediated self-reflection can lead to amazing intellectual and artistic achievements but also to destructive forms of unhappiness. A frequently cited quote is “A Wondering Mind is an Unhappy Mind”, thus stressing out the strong correlation between mind-wandering or daydreaming and sadness. This system might be broken as well, if its fragile equilibrium is shifted towards excessive rumination and obsessive thoughts, leading to psychological illnesses and mental disorders like depression, anxiety, schizophrenia, obsessive-compulsive disorders and existential distress. Furthermore, therapies like meditation have received attention for influencing activity in the DMN, suggesting this may be part of their mechanism for improving well-being.

“If the doors of perception were cleansed

every thing would appear to man as it is, Infinite.

For man has closed himself up,

till he sees all things thro’ narrow chinks of his cavern.”

― by William Blake from “The Marriage of Heaven and Hell”