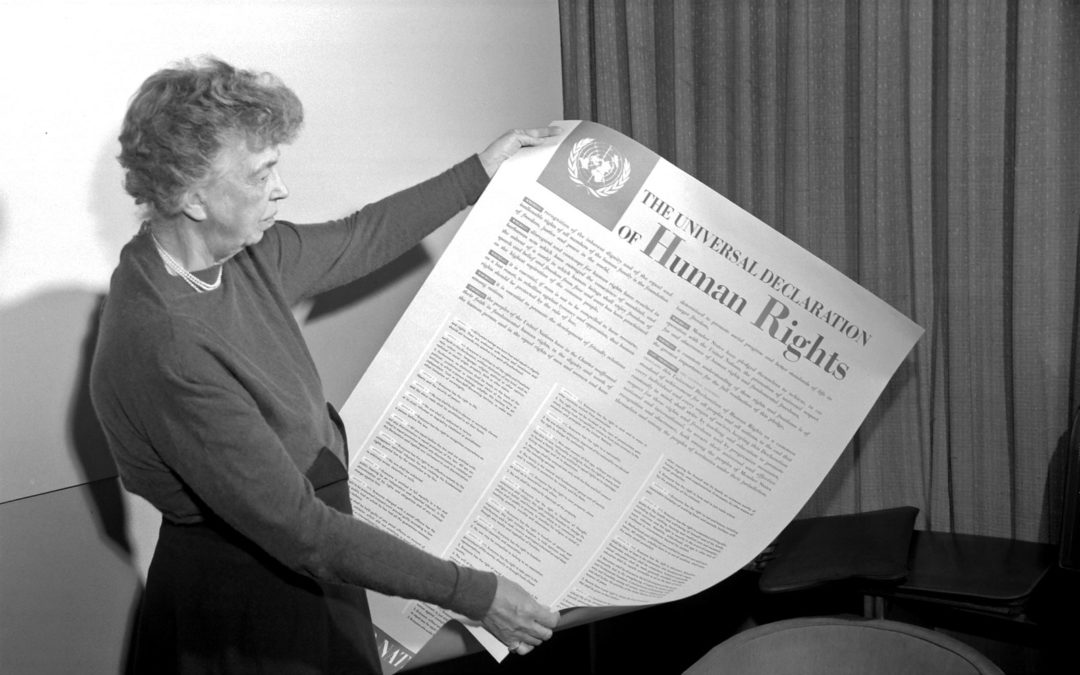 In 1947, a Human Rights Commission, led by Eleanor Roosevelt, a pioneer and fervent supporter of human rights, met to draft what would become the Universal Declaration of Human Rights. The Commission was composed of a committee created by the Economic and Social Council of the United Nations of the eight member states selected based on the criterion of the broadest geographical representativeness. The Declaration was presented in September 1948 and adopted a few months later. On December 10, 1948, the Universal Declaration of Human Rights was seen as a mere non-legally binding instrument, a “soft law” that laid the solid foundations for the rebirth of consciences shaken by the Second World War. In the following years, it became a crucial instrument of international law to protect fundamental human rights and a pillar of subsequent legally binding conventions and documents.

In October 2005, the General Assembly of UNESCO responded to rapid developments in science and technology and related ethical issues and approved the Universal Declaration on Bioethics and Human Rights. Starting from the Universal Declaration of Human Rights, below we would like to present the commitment of the UNESCO Chair of Bioethics and Human Rights. Since its 2009 foundation, the Chair has been and continues to be at the forefront of the dissemination and promotion of universal human rights through projects, study groups, advanced training courses, national and international workshops.

Article 1 of the Universal Declaration of Human Rights states that “men are born free and equal in dignity and rights”, and have “duties to the community in which alone the free and full development of his personality is possible.” (art. 29), It adds that “the right to seek and to enjoy in other countries asylum from persecution” (art. 14). As part of the “European Citizens for Solidarity” (EUROSOL) project, co-funded by the Europe for Citizens program, on November 27, 2017, the Chair organized a public forum on the topic of “Human Dignity and Human Rights of Refugees.” The event brought together dozens of experts from eight countries to discuss EU resolutions related to the refugee crisis and propose new strategies and actions to address the urgent issues of the day: promoting intercultural dialogue, combating the stigmatization of migrants, and promoting tolerance and empathy. In addition, through the Bioethics Global Art project, the Bioaesthetics study group and the collaboration with the Fondazione Marianna, of which the Director of the Chair, Prof. Alberto García Gómez is an advisor, the Chair is pioneering the dissemination of human rights through art in all its forms. In 2011, 2013 and 2015, the Chair organized two art competitions and several exhibitions of unique pieces created by international artists committed and sensitive to the struggle for the rights of the most vulnerable.

Article 18, which enshrines freedom of thought, conscience and religion, introduces us to the project Bioethics, Multiculturalism and Religion with which the Chair wants to provide a place for debate where representatives of different religions and traditions can: engage one another in a sustained scholarly dialogue about global bioethics; cultivate an amicable atmosphere so participants can learn about each other’s tradition or religion with discursive empathy; promote mutual understanding of global bioethics through respectful discussion and scholarship; strive to develop the linguistic and conceptual space in which common ground or convergence can emerge and be mutually recognized and appreciated; and finally foster creative cooperation while respecting the dignity and uniqueness of each tradition.

The Chair, in conclusion, seeks to create venues for diverse leaders in bioethical thought. Working together in a spirit of respect and friendship, it aims to provide a common framework to guide the application of bioethical principles in light of the UNESCO Declaration. In this way, ethical, legal, and public views, decisions, and actions related to medicine, life sciences, human rights, and responsibilities can be informed and illuminated.