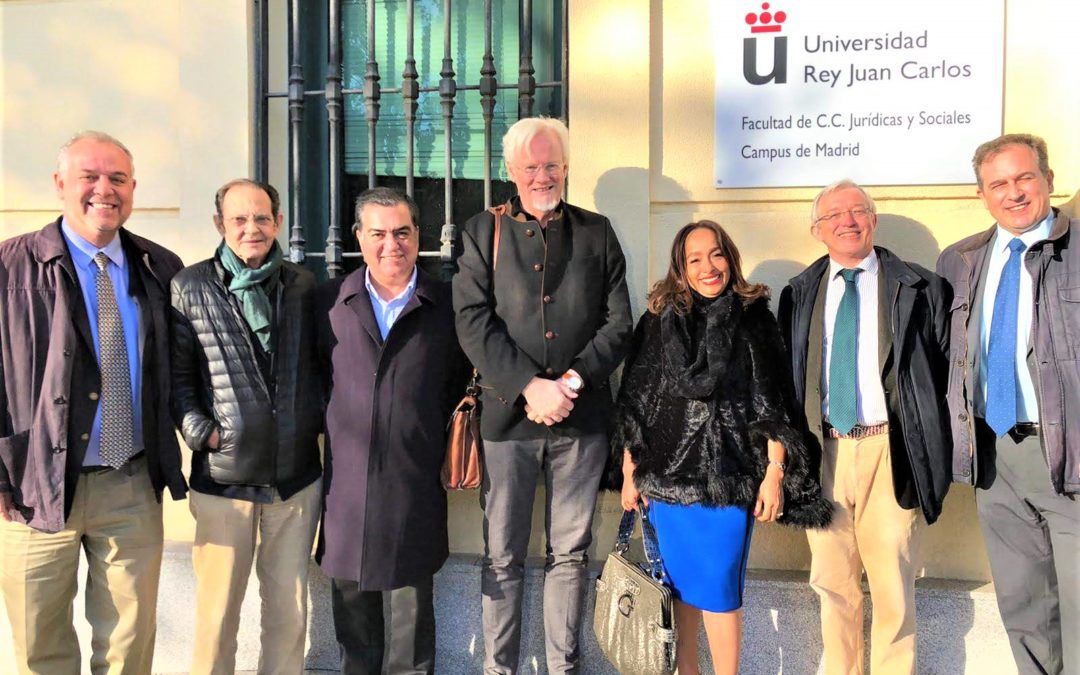 “Towards a Bioesthetics in favor of integral human health”

On January 8-9, 2020, the Bioesthetics Group of Study (Grupo de Estudio sobre Bioestética) met in Madrid for the International Research Seminar in Bioesthetics. A variety of academic profiles exposed and compared their respective research on the epistemological status, value and function of Bioesthetics, intended as an emerging field of investigation in which bioethics meets aesthetics and, together, they arrange a new theoretical-applicative grammar of axiological, anthropological and clinical investigation, capable of reaching artistic disciplines, drawing attention to the centrality of the human being, of the principles recognized and protected within the paradigm of fundamental human rights and of the person-guardian inserted in the inhabited present. 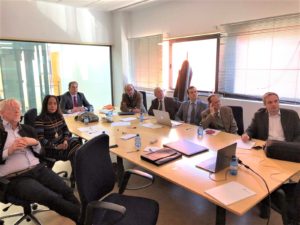 The Grupo de Estudio sobre Bioestética (GBE) of the UNESCO Chair in Bioethics and Human Rights (bieng part of the “Red Internacional sobre Bioética, Estética, Tecnociencia y Bioderecho”), promoted this second International Research Seminar in Bioesthetics, held in Madrid at the Campus of the Universidad Rey Juan Carlos, last 8-9 January. The academic challenge that GBE intends to face is innovative, transdisciplinary and acute in its approach and research methods. The aim, in fact, is to bring together (bio)ethics and (bio)aesthetics, two contiguous realities that co-implement and recall each other, being, ethics and aesthetics, both explanations of the human being in his peculiar nature aimed at metaphysics, therefore at the demand for meaning and moral action that is poured into what he is and accomplishes through his actions. In this sense, the interaction between bioethics, medical and environmental ethics, and aesthetics is configured as a further universal linguistic-communicative system of human identity, as substance and as values, compared with the specificity of the single dilemmas faced daily by bioethical investigation, both in the generality of the healthcare context and the care relationship, to be cultivated simultaneously with the doctor-patient alliance as a peculiar interpersonal relationship between two human beings. 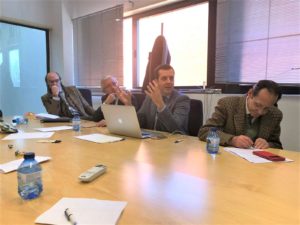 As for the bioethical research, also bioesthetics maintains the main focus of its work on the intrinsic dignity of every human being, from which derives the expression of fundamental human rights, a bastion of unquestionable unavoidability transversal to globalized reality and social, political, ethical, religious and cultural pluralism. Through the empirical experience of aesthetics, it is possible to see first-hand the content of these principles, which belong to the whole humanity; it is possible, therefore, to find an interactive model capable of arranging dialogue and edifying sharing within diversity, enriching it with the fundamental principles that permeate all communities globally and direct their efforts to the common good. Out of this admirable potential comes the opportunity to arrive within the academic, educational, artistic, cultural, political locations, bringing the added, transformative value of beauty.

Each of them presented and discussed with the other members their own research, covering a wide range of topics, from the epistemological status of bioesthetics to its relation on particular issues, such as bigorexia; end of life (euthanasia and analysis on the concepts of “worthy death”, “beautiful death”); the relationship with care and the transformative power of beauty in the physician-patient relationship, the meaning of pain and suffering in the condition of infirmity; the constitutive vulnerability of the human being in relation to beauty and the virtue of hope; to more emerging issues such as transhumanism, for example. What emerged arranges, first of all, the philosophical value that combines aesthetics – human act – applied ethics, placing them in synergy with each other; basins of collection from which to draw important cues in order to bring out and enhance the virtuous habitus, reflection of beauty, accompanying the iter of discernment that puts it before a sort of ethical “ugliness”, that is in turn an aesthetic “ugliness”, and vice versa. A circularity which is capable of forging and refining individual and social ethical maturation, following an empathically transmissive procedure between exteriority and interiority (it is important to dwell on the analysis of the value that narrative identity can offer in this regard) in the learning of anthropology and the values contemplated, within the aesthetic experience, well identified also in a “contemplative” comparison of the human being towards the observation of the inhabited context and the one more properly centered around the human. 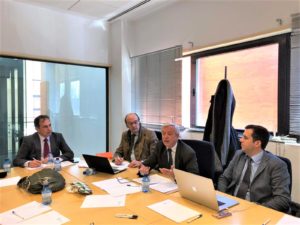 The latter evidently foresees that first of all it is necessary to arrange an articulated reasoning about the substantial truth of human nature, a multidimensional unity (psyche, body and spirit) in dialogue. In particular, bodily perception/awareness and aesthetic acquisition are also found in the onset of certain pathologies such as the aforementioned case of bigorexia, in which the bodily image prescribes anthropological and moral measures on the reading that the patient performs on himself, poured into what he intends with “health”, “perfection”, “beauty” in precarious stability with an almost obsessive perfectibility. The content of these concepts affects the behavioral aesthetics of human action, reflecting in the acts the moral choice that precedes them, which is not immune from the conception that the subject holds of his fellow human beings. For this reason, the link between ethics and aesthetics is bilaterally pervasive and, when applied to the healthcare field, makes the medical profession a real “medical art”, the latter being an encounter between two personal existences that passes from bodily experience to the intimacy of the human soul. This drives a noble vision of the medical vocation in stark contrast to widespread contemporary trends where the humanization of medicine expresses a serious vulnus and an imposing task, caused by the undue techno-scientific mechanistic reductionism of the medical practice, and by the subjectivist relativization of what “normal” and “pathological” constitute facing the integrated wholeness the human being represents: transience and perfectibility; overkill (hybris) and limit.

This last twofold value questions what is the concrete positioning of a clear line of demarcation between therapeutic and enhancing intervention in relation to the aesthetic taste that is capillary derived from the medical intervention and inherent to the totality of the human being, in perfect balance within the terms of the attitude of care towards the others, entrusted in custody of which it is not possible to dispose arbitrarily. This is the reason why bioesthetics observes the human being following the contemplative and non-creative principle (homo faber) in which the centrality of the person is reinvigorated by the sense of beauty and sublime, placed in a positive, prudential relationship with technique, escaping at the same time the technocratic imperative. The contamination between ethics and aesthetics synthesized in the “bioesthetics” neologism, makes vulnerability the peculiar entry bottleneck for the appeal of the re-appropriation of corporeality, as an element inseparable from the human being, embodied spirit, and existential worry that runs through both artistic and ethical nature, in collision with philosophical currents that yearn for anti-anthropocentric perspectives, in which the first factor in disuse would be the body, a biological shell. 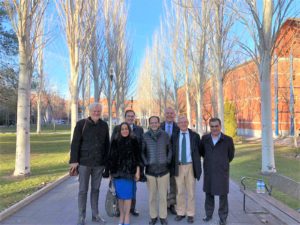 The emphasis on the aesthetic tangibility of pain, anti-dualistic proof of the human being (it leads to the transcendence of the only creature capable of asking questions of meaning about death and suffering), is a springboard to contrast the miseducation, to the contingent nature of the person-subject, and not object of practical-instrumental applications. Once again, the factor of beauty and, in particular, of the “clinical beauty”, connected to the anthropological condition of temporality, arises, where is shown the conflict experienced with our own body, subjected to pain if we allow it cannot be reached through metaphysical thought, yielding to indifference and despair. An objective example of this are the dilemmas about the end of life, in which the euthanasic and, generally, also assisted suicide demand radically responds to a bad identity-anthropological, biographical and ethical understanding, up to the point of making the binding claim of being able to legitimately take our/one’s own life in order to cancel pain, administering the death event with licentiousness rather than freedom (inseparable from responsibility). Bioesthetics can break the deconstructivist and nihilistic scheme on the human being by accompanying him, through a contemplative ethic centered on the value of hope, to a full mastery of himself in virtue of the awareness that he can evolve the obsolete component of his own nature (as fragility, pain, death are intended) into a field of valorisation so that death (we could paraphrase it also with disability, illness, fragility) becomes “worthy and beautiful death”, because it is accomplished with meaning, transforming the tragic attitude into a dramatic (bearable) one. 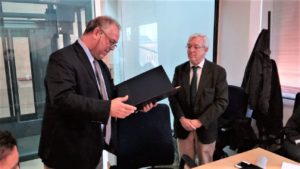 The Director of GBE Dr. Javier Barraca Mairal honored by Prof. Alberto García Gómez, Director of UNESCO Chair in Bioethics and Human Rights[/caption]During this seminar, some members of GBE that have being actively engaged in the group of study were awarded by the UNESCO Chair and the “Red Internacional sobre Bioética, Estética, Tecnociencia y Bioderecho” with a diploma and a medal for their academic teaching and research merits and their scientific contribution. 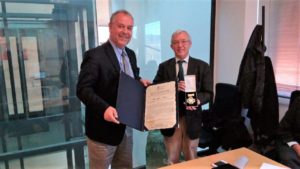 Thanks to the propitious sharing with many voices, this second International Seminar has not only engraved the distinctive traits of Bioesthetics, but of the trajectories of usability in which it is called to give its contribution with ever greater incisiveness, revolutionizing the common sense on aesthetics itself and its relationship with the human being.

More pictures during the award cerimony below: 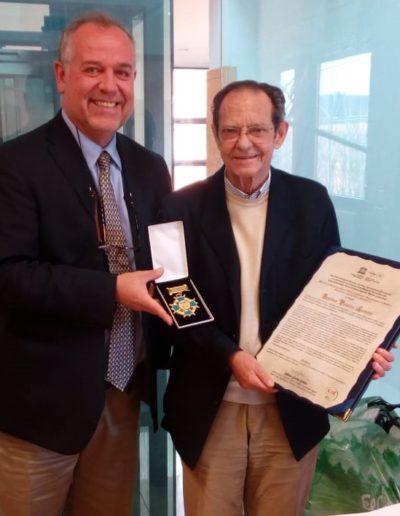 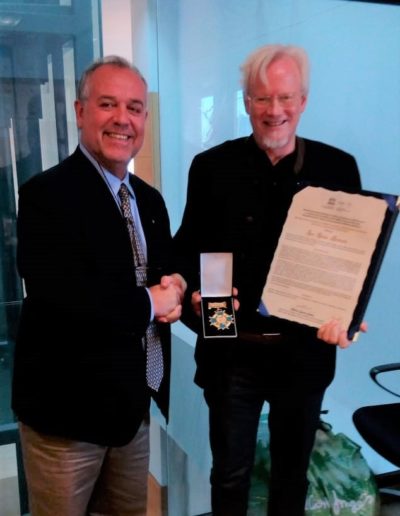