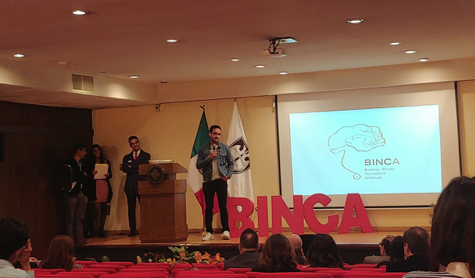 The interdisciplinary group of ‘’Clinical Bioethics and Neuroethics of Anahuac University’’, previously known as ‘’Bioethics and Clinical Neuroethics and Investigation Anahuac’’, celebrated its fifth anniversary on Friday 20th of September, commemorating members and people who have actively participated to ensure constant development and growth of the group. Special recognition was given to students founding members, the first generation of the interdisciplinary neuroethics diploma, to other essential members and to each person who is currently part of the group. Dreams which were established in the beginning where reminisced. It was acknowledged how the initial objectives were achieved, and how this has filled the team with new dreams, goals and expectations.

The event was inaugurated by the assistant of coordination, Juan Carlos Casillas Alcalá, who joined the team in 2017. ‘’It has been 5 years of constant questioning, reasoning, discussing to find knowledge, organizing meetings to enhance research and to comprehend problematics through science and humanities‘’.

These words were followed by three videos which showed the group’s activities. The first video showed events which have taken place in the last 2 years and mentioned some accomplishments during this period. Additionally, it reflected some of the feelings through which the current members relate with the group.

The next one was a speech given by Dr. Maria Elizabeth De Los Rios, president of the Interdisciplinary Cathedra of Clinical Bioethics. Here, special recognition was given to Dr. Mariel Kalkach, for ‘fighting for her dreams’, to father Antonio Cabrera for giving the group ‘wings to fly’ and ‘looking for new horizons’, and lastly to Mr. Adolfo del Valle for ‘supporting bioethics projects which are good to society’. The speech was ended by explaining how BINCA not only is a synonym for knowledge but also of community; sisterhood and brotherhood, it is a family.

The last video was a message by the UNESCO Chair in Bioethics and Human Rights, Dr. Alberto García Gómez: ‘’I still remember the days when Dr. José Damián and Dr. Mariel Kalkach joined a summer course and discussed about neuro-bioethical, anthropological, juridical and social perspectives. Because of this idea was born, and shortly after it became reality’’.

Unfortunately, due to other compromises as president of the Mexican society in Neurological Surgery, Dr. José Damian Carrillo Ruiz couldn’t attend the event. However, his speech, dedicated to BINCA, can be found on our website. His role as a great supporter in the creation and development of the group was mentioned by Dr. Mariel Kalkach, founder and coordinator of BINCA. She explained the academic necessities which incited the origin of the group: ‘’We sought to promote neuroethics in Mexico’’, and to this, practical matters were added such as ‘how to apply bioethics to the real world, whilst interacting with other professionals whose perspectives might show important differences?’. ‘’The weight of an academic title has to reflect on the theoretical and practical capacities of the graduate, and although in Mexico we count with brilliant academics and theorists in bioethics, we are lacking practical capacity.’’ With this mindset in 2014 a group of 7 undergraduates, dr. Kalkach, Dr. Carrillo and Dr. de los Ríos, was founded.

We began with small sessions which throughout the years, and with a lot of efforts, turned into a growing audience of students and professionals of different backgrounds and institutions. Eventually, a tradition was born: promoting education with an interdisciplinary method. BINCA seeks that their academics and researchers ‘strip away their egos, prejudices and conventional postures, and look for an honest challenge to pursue truth’.
The objective is that students learn to work with this method. The relevance of interdisciplinarity and foundations of the group are well known to the current nuclear members: Sofía Yarza del Villar (med), Juan Carlos Casillas (med), Adrián Casillas (comm), Nicole Hilbert (med), Scarlett Huerta Pérez (med), Julio Téllez Gómez (psych), María Fernanda García Romero (med), Ana María Gutiérrez (med), Mariana Vargas Hoyo (med), y Aquetzali Andrés Millán (med). This tradition is always transmitted to new members who wish to join the team, such as this year’s newcomers; Saulo Guimel Romo Contreras (med), María Fernanda Rodríguez Pérez (psych) and José Guillermo Flores Vázquez (med).

After introducing the current BINCA team, founding members, Dr. Katia Ávila Fernández, Dr. Tomás Moncada Hadid, Dr. Emiliano Montiel Núñez y Dr. Mijail Tapia Moreno, shared their testimonies on BINCA. ‘’It was a pathway that let me grow personally and academically’’, ‘’BINCA is a great opportunity to grow because it draws you away from the ordinary’’, ‘’It’s a great opportunity to satisfy our curiosity’’, ‘’I was given the chance to accomplish my first publication, as well as to attend congresses as a speaker’’, and ‘’Without knowing what was going to happen, everything happened’’, were a few of the words which these members used to describe their unique experience at BINCA.

Later, Dr. Germán Carreto, coordinator of Virtual Education for the Interdisciplinary Neuroethics Diploma in 2018 (DIN2018) briefly described the course. The intensive course of 100 hours counted with the collaboration of 28 professors from different specialties and parts of the world. A total of 18 alumni took part, and 10 of them with ‘’excellent performance’’.

Later on, Dr. Jorge Álvarez Díaz, winner of the World Health Organization’s award for ‘’Excellence in Iberoamerican Health and Bioethics’’, in 2007, and author of several articles and books, being the most recent one ‘’Neuroethics – relations between the mind/brain and moral/ethics’’ (Neuroética – relaciones entre mente/cerebro y moral/ética), gave a touching speech on the formation of neuroethicists, mentioning the fact that apart from the DIN2018, there is no other educational course in Neuroethics in the world. He explained the historical development of this branch, as well as its importance. ‘’It’s not only about reflecting, but to act’’, were words he used to describe BINCA.

Last but not least, Dr. Tomás Barrientos, Director of the Faculty of Health Sciences, in representation of Dr. Antonio Cabrera Cabrera, the Dean of the Bioethics Faculty who was also present in the event, gave a speech in order to show gratitude to BINCA’s hard work, endurance and performance through the years.

BINCA is a group of people who seek to better understand the world and create solutions through dialogue and practice, a dynamic form to promote the interest of current bioethics issues. BINCA looks to contribute to form a society which questions everyday problems and looks for solutions as a team. It’s an interdisciplinary group which integrates everyone’s expertisse and looks for auto-realization of each individual, without forgetting to grow as a team. BINCA is Clinical Bioethics and Neuroethics for everyone.