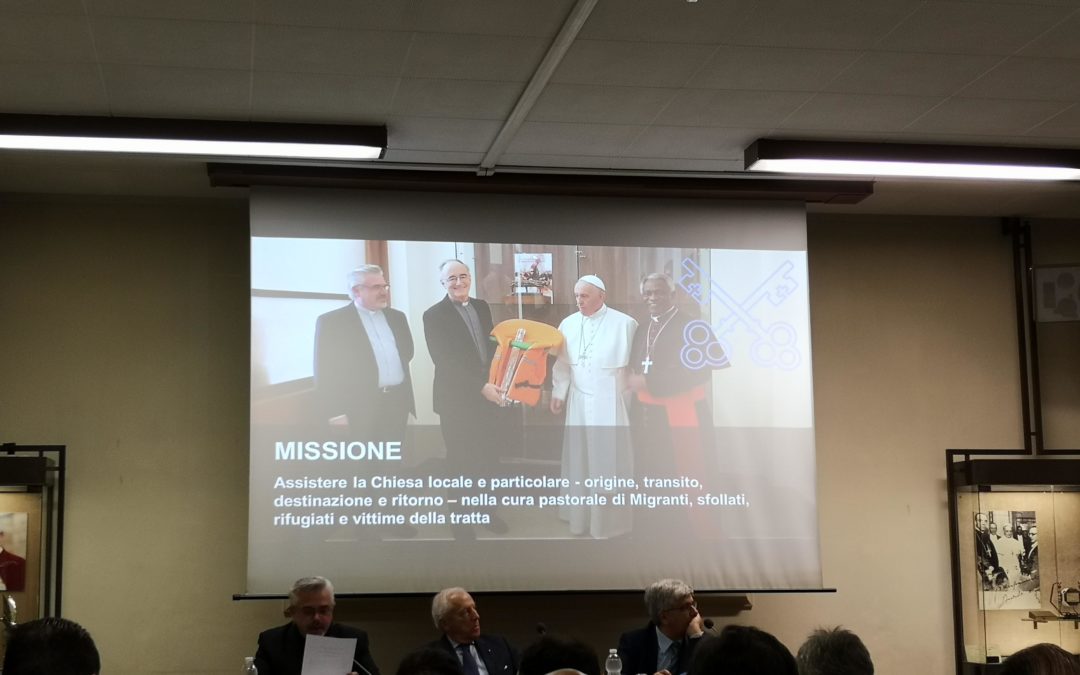 Last June 20th was World Refugee Day, an occasion for which the Argentinian Embassy to the Holy See organized a morning of reflection on the issue of migration at the headquarters of the Communication Department of the Vatican with a focus on the caravans of migrants typical of South America. This invitation for open dialogue deepened the discussion of Venezuelan migrants.

The Guglielmo Marconi room in Piazza Pia in Rome was packed with familiar faces, such as Ambassador Rogelio Pfirter of the Argentinian Embassy to the Holy See, Fr. Fabio Baggio Undersecretary of the migrants and refugees section of the Dicastery For Promoting Integral Human Development, Andrea Tornielli, editorial director of the Holy See’s Communication Department (Vatican News), Paola Alvarez of the International Organization for Migration, Andrea Pecoraro of UNHCR, Martina Liebsch, director of the Caritas Internationals advocacy office, Sister Eleia Scariot , Scalabrinian missionary and director of the Chaire Gynai project, Gianni la Bella, professor of contemporary history at the University of Modena and member of the presidency council of the community of Sant’Egidio, and finally S.E.R. Archbishop Paul Richard Gallagher, Secretary for Relations with States of the Secretariat of State of the Holy See.

Ambassador Rogelio Pfirter welcomed the participants by introducing the most common reasons why thousands of people are forced to migrate: economic adversity, as the result of persecution or conflict and climatic phenomena. Ambassador Rogelio Pfirter’s commentary emphasized how fundamental it is to establish joint work between states in order to stem the universal problem. The continents most involved are Asia, Europe, Africa and South America. According to the 2016 United Nations report, Venezuelans have become the largest displaced group in the world. In 2016 there were 700,000 displaced Venezuelan migrants, and today there are over 4 million.

On the 29th of September we celebrate the 105th Day of the Migrants and Refugees instituted by Pope Benedict XV in 1914. For this occasion, Pope Francis launched an important message on the 27th of May, “It is not just about migrants, it is about our humanity”, and invites us all not to be afraid of the stranger, or of the unknown, by implementing the charity that resides in our humanity, and not to feed what is called the “globalization of indifference” that separates us from one another. As recalled by Dr. Andrea Tornielli, the family of Nazareth is an example and model in support of all migrants, refugees and displaced persons who, pressed by persecution or need, find themselves forced to flee and to be separated from their loved ones, as Joseph and Mary were. Leaving the word to Fr. Fabio Baggio, Tornielli emphasizes that “states have an evangelical responsibility to support migrants”.

P. Fabio Baggio presented the work that the Church is doing worldwide which involves the 20 points of action of the Global Compact, which we have had the privilege to listen to last May 15th at our Pontifical Athenaeum Regina Apostolorum. The challenges increase every day, and it is necessary to develop effective responses through the creation of assistance centers, housing, jobs, health care and vocational training. These are some of the actions carried out by the section on migrants and refugees that operates worldwide and gives support to the Church by accompanying people at every level of migration.

In the second part of the morning, the round table was chaired by Dr. Paola Alvarez and Dr. Andrea Pecoraro. Both presented the numbers concerning international and regional migration in Latin America, and then in Venezuela.

The International Organization for Migration (IOM) was born in 1951, but only in 2016 did it enter the United Nations system as a connected agency. Today it has 173 member states, a statistic that encourages us to reflect on the magnitude and space it occupies on a global scale. The latest reports show that there are 258 million international migrants and 760 million internal migrants. There is a tendency on the part of the media to focus on international migration, “relying too much on words and not on facts” and giving space to an increasingly distorted perception of the reality of migrants. Alvarez mentions the global compact, based on the goals of the 2030 agenda, to highlight the second point which aims to “minimize the adverse conditions and structural factors that drive people to leave their country of origin”. Leaving the word to Pecoraro, Alvarez adds that “the global compact gives the opportunity to rethink immigration, invites us to think of migration as a choice”.

Andrea Pecoraro presented the work carried out in recent years by the UNHCR which has analyzed the phenomenon of constant migratory growth. According to the UNHCR annual report, forced migrants increased exponentially due to the Syrian conflict. This phenomenon is also manifested in many African regions, which see an increasing number of displaced people in developing countries. There is also a notable increase of migratory growth in South America: the protagonist of the discussion being Venezuela with its aforementioned 4 million displaced persons.

The third part of the morning was dedicated to the testimonies of some projects promoted globally by Caritas, the Scalabrinian Missionary Sisters and the community of Sant’Egidio. The discussion was concluded by S.E.R. Archbishop Paul Richard Gallagher. Dr. Martina Liesbch presented the new campaign “Sharing the journey” on migration. The campaign was launched last September 27th during the Pope’s audience with migrants and aims to promote the culture of encounter and to help see the phenomenon of migration with different eyes. Similarly, Sister Eleia Scariot presented the project of the Scalabrinian Missionary Sisters in Rome “Chaire Gynai” (Welcome Woman) which has opened two houses for refugee women and children in vulnerable situations. In both cases, social inclusion activities are carried out based on the 4 verbs of the Pope: accepting, protecting, promoting and integrating. These words echoed for the whole morning inside of the classroom. Prof. Gianni La Bella, of the Sant’Egidio community, reiterated the importance of promoting humanitarian corridors to establish a system of legal and safe migration. The humanitarian corridors carried out by the community serve as a clear and concrete example that it is possible to regulate the flow of migration.

As anticipated, the morning ended with a concluding statement from Archbishop Gallagher, who reiterated that regulating migration and helping migrants is a global responsibility, as it is also the responsibility of migrants themselves to learn about the culture of the state that welcomes them. The UNESCO Chair supports this strong message through the implementation of the CivicAL project, which foresees the development of chapter 3 of the manual for educators, which concerns the rights and responsibilities of migrants. It is a message that UNESCO Chair has been supporting for some time, and which it has been able to develop on several occasions, such as during the year 2017 when it supported the activities of the Eurosol project together with other partners from different European member states.