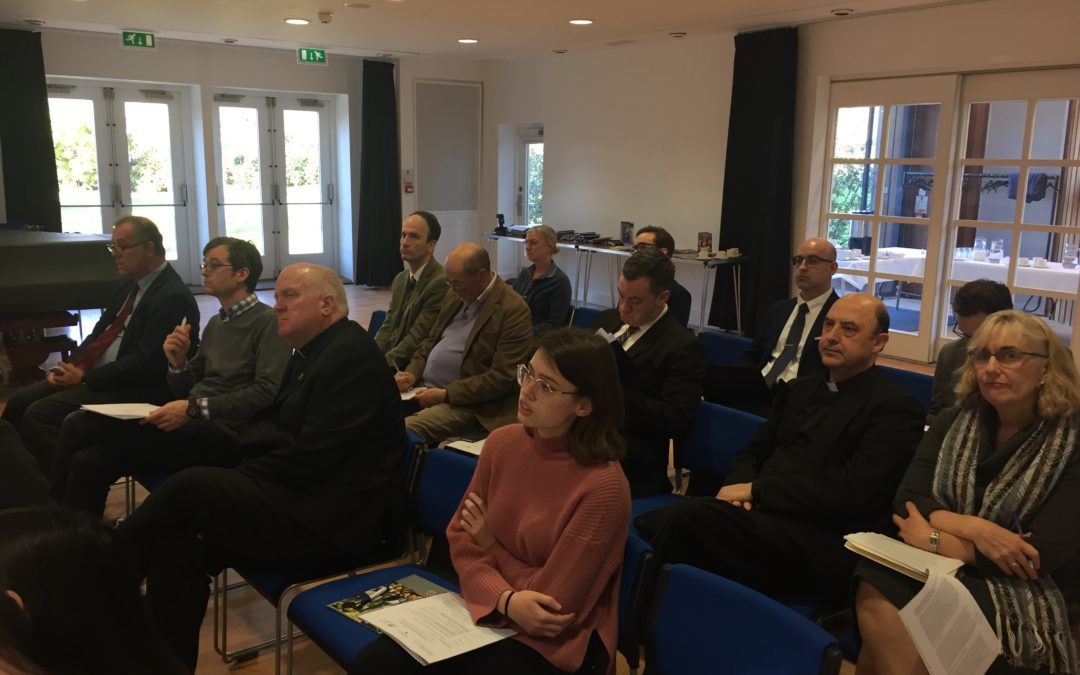 The UNESCO Chair in Bioethics and Human Rights is glad to have supported the publication of the Journal of Disability & Religion Special Issue (3) 2018 on ‘Navigating impasses in Bioethics: End of Life, Disability and Mental illness’.

This special issue followed the interdisciplinary research workshop “Navigating Impasses in Bioethics: End of Life, Disability, and Mental Illness,” (freely available online until May 31, 2019) held on December 8, 2017, at the Von Hügel Institute for Critical Catholic Inquiry (VHI) at St Edmund’s College, University of Cambridge, that was attended also by our director Alberto Garcia and Fr. Gonzalo Miranda, dean of the Faculty of Bioethics at Pontifical Ateneum Regina Apostolorum in Rome.

The core topic analyzed through the articles is euthanasia. This is both a timely and highly debated topic in Europe and worldwide, as it is shown by the ongoing judicial and parliamentary debate concerning Assisted suicide in UK, the 2018-judgement of the Italian Constitutional Court and the push towards a regulation on assisted suicide in Italy, and the 2017-legalization of Assisted dying in Canada.

The articles included in this issue provide a multifaceted exploration of this topic, merging both legal and ethical reflections. They ultimately address how the legalization of euthanasia is influenced by ethical concepts like quality of life, dignity, autonomy, agency, consent and what practical consequences this brings forth.

The first two articles, edited by Schiltz and Campos, focuses on the practical implications of the legalization of physician-assisted suicide in the USA and Canada. Schiltz claims that the legalization of physician assisted suicide for people with disabilities amounts to a form of discrimination. More fundamentally this regulation is in stark contrast with the American disability Act in so far as it sends a clear discriminatory message towards disabled people. ‘The statement that is made by such laws is that life with a disability is not worth living; by extension, persons living with disabilities are not worthy of life’ (Schiltz, 242-243). Thana de Campos, focuses on the Canadian legislation exploring the implication of the inclusion of mental health patients. She challenges the mainstream understanding of human dignity portrayed by this legislation, claiming that it rests on a mere-homo economicus view, that is to say one that focuses on a pure quality of life understanding. She claims instead that a personalist view of dignity should be purported and hence the intrinsic value of every human being supported.

The second group of articles further enriches the reflection providing personal stories concerning disability. McKearny, asks the burning question of ‘how much power should someone have over the life of the most vulnerable?’ This question arises from his personal experience at L’ Arche, a religious community that offers support to people with cognitive disabilities. His reflections rests on a critique of autonomy, care and responsibility that have informed the idea of agency and the euthanasia debate. Fistein, discusses the results of the Future Care study, an empirical research run by the Department of Primary Care and Public Health of the University of Cambridge. When it comes to patients with progressive neurological diseases, whose cognitive and physical functions are often strongly impaired, Fistein claims that it is key that the care-planning ponders not only norms of effectiveness and quality of life, but also moral principles of life-preservation. This is surely not a straightforward task: advantages and disadvantages should properly evaluated in the light of the patients’ right to treatment and their quality of life. David Jones, reflects on the tie between assisted dying and suicide. Through a reflection on two examples of suicide by disabled people, one unassisted and one assisted, it highlights that there are some points of dissimilarity, but also some of similarity. The aim of his reflection is to stress the danger of suicide, whether assisted or unassisted, for those who would be eligible for euthanasia in the low countries or assisted suicide in Switzerland.

The third group of articles expands the reflection provided through philosophical and theological accounts of life and death for people with disabilities. Ripamonti, reflects on the concept of autonomy in dying as the concept generally behind the euthanasia regulation. She claims this concept to be flawed because it excludes all those who live in a condition of dependency. To be un-autonomous ultimately does not mean to loose one’s own personal dignity. The lack of control over one’s life circumstances does not imply the lack of value or life’s ultimate meaning. Brock, reflects on the role of economic rationality in shaping the idea that some lives are not worth living, like those of people with disabilities. The life of a disabled is in a condition of ‘debt’ something that is rejected by nowadays western societies. This perception is also in stark contrast with early Christian ideas of human solidarity: it is an ethics of mutual support that we should expect, rather than the legalization of euthanasia. The final article, edited by Elliot, provides a theological account. He challenges the anthropological idea of ‘despair’ and proposes the theological hope as a way forward. In this view disabled patients are themselves made at the image of God: they are the living image of Christ, bearing his sufferings but also, in hope, His resurrection.

This special issue provides a unique account of one of the most debated topic: euthanasia. Its uniqueness stands on the variety of contributors, from legal, to theological, philosophical, medical, on the topic of euthanasia. It indeed includes a wide range of  timely and thought-provoking articles that will shape the broad academic and non-academic debate concerning end-of life issues, especially euthanasia and disability.