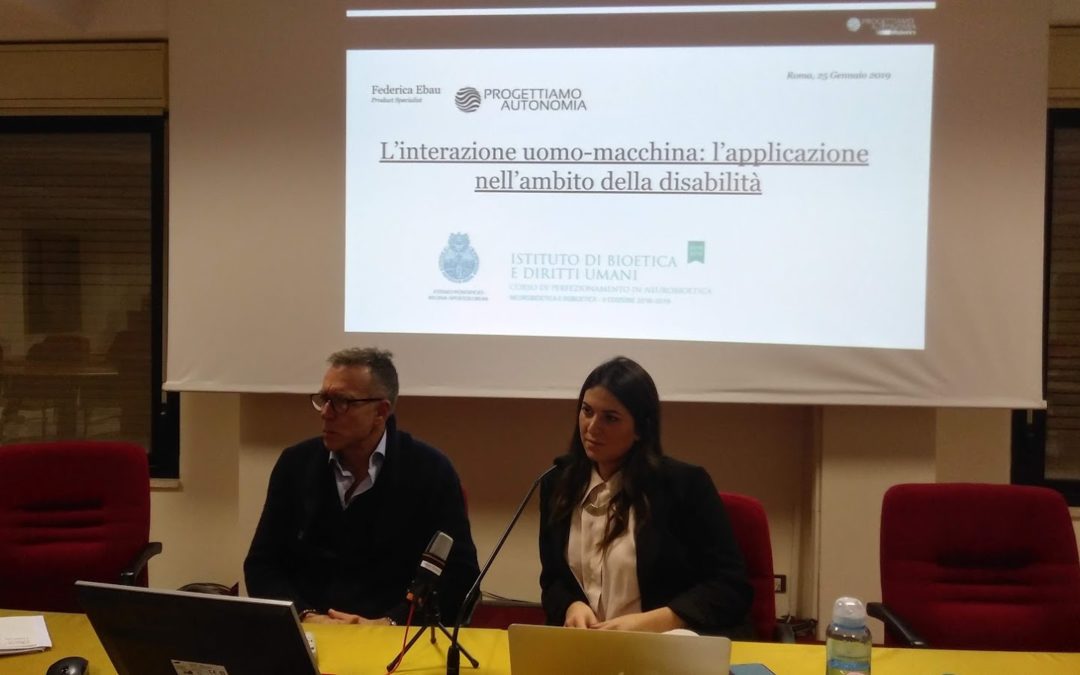 Encouraged by the words that the Holy Father, in Humana Communitas, dedicated in memory of the twenty-fifth anniversary of the Pontifical Academy for Life, also accompanied by the operative reality of Dr. Federica Ebau, we are called again in this research session to ask ourselves how to conserve humanity within the context of technical innovation.

Last January 25th, the Interdisciplinary Research Group on Neurobioethics, in cooperation with the UNESCO Chair in Bioethics and Human Rights and the Science and Faith Institute, hosted Federica Ebau, Product Specialist of Progettiamo Autonomia Robotics SRL, in order to reflect on the role of robotics in rehabilitation, a speech – as suggested by Claudio Bonito during his introduction – which could be synthetically defined as a conversation about the responsible use of robotic development. Precisely inasmuch as it is a graft between flesh and artifice, an external habit, robotics cannot disregard proper ethical investigations around the approximation between thinking reality and mechanized reality. An ambivalent combination of euphoria and fear, both settled over the uncomfortable session of the techno-scientific paradox.

Using exactly the term “paradox”, Pope Francis, in the letter mentioned above, presses on the anguish experienced by peoples in the era of scientific excellence. History, indeed the very birth of bioethics, marks the continual warning to tirelessly illuminate the action of the human being, therefore moral action, so that it can act as an indispensable glue between specialized studies and the true good for the “mankind’s care,” where the fundamental rights of every member of the human species, the dignity recognized to them and the responsibility towards the common good are contained. Transversely the commitment of international organizations such as the UNESCO Chair in Bioethics and Human Rights, which has the specific purpose of effectively feeding the solidity of common roots, in order to realize what the Holy Father has also recalled: a “global bioethics”.

Clinical practices, such as the professional experience presented by Ebau, concretize the proposed theorization. Robotics – the preferential research field of the speaker – is not only decisive for national and international territories, but rather a real investment material of the contemporary era, and there are three areas in which robotics will be massively involved: the military one, the hospital one and the industrial one. In the rehabilitation context, the patient – generally a paraplegic person – experiences a complex clinical process compared to able-bodied people, but also because these patients lead a life that is mostly active, domestic, athletic or lively working with an enormous therapeutic and rehabilitative need to combat sedentariness. The previous testimony of Carmine had already made us realize the importance of enormous accomplishments produced by self-esteem, willpower and fighting spirit; in the same way Ebau confirms the positive change in her patients and the centrality, in comparison with the machine, of adopting the existential perspective. “A boy in a wheelchair, with no sensitivity from the chest down, feels nothing. His perception of space is very different from ours; he feels like a tightrope walker hanging in the middle of nowhere”: for this reason the impact with the exoskeleton and therefore the adventure towards a change of dimension, from the bottom to the top, is a delicate point in the relational experience and, in this sense, has been interesting to hear the technique put in place by the doctor, proposing to the patient his own image through a mirror, a method of joining two images of the same person.

Once again we are witnesses that the real conflict between artifice and human being refers to personal identity, to the question about the self.