Participation in the 14th World Congress of Bioethics in Bangalore, India 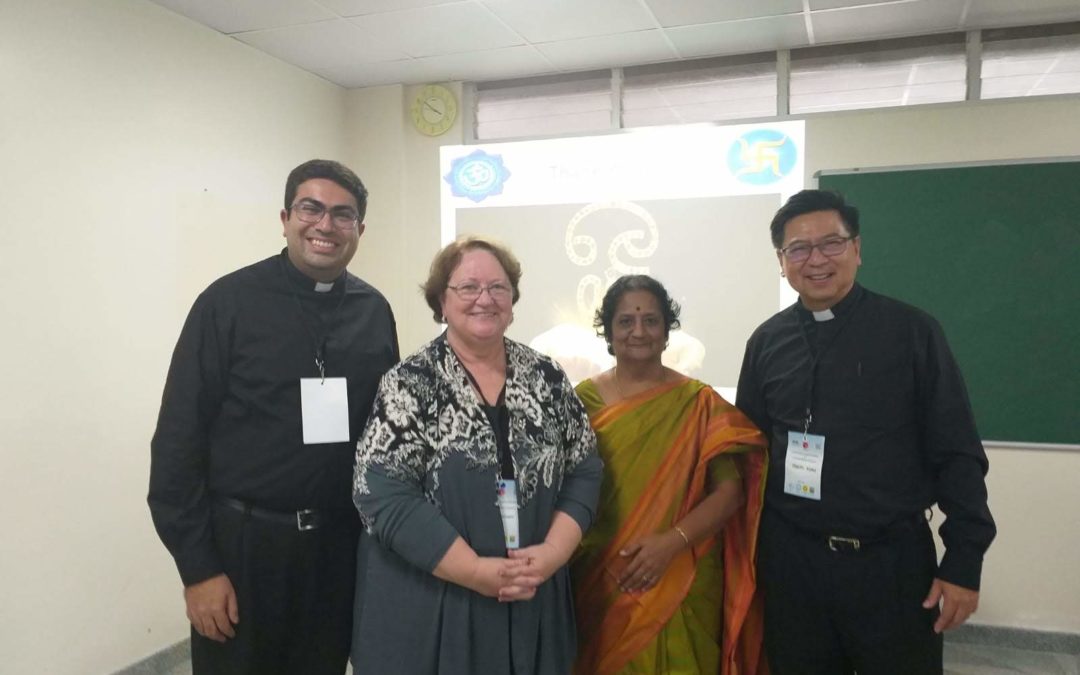 From December 5 to 7, 2018, the World Congress of Bioethics was held at St. John’s Medical Centre in Bangalore, India.  The theme this year was “Health for All in an Unequal World: Obligations of Global Bioethics.”

Several fellows and collaborators of the UNESCO Chair participated in this encounter of around 400 bioethicists all over the world.  They presented a symposium on “Social Responsibility and Health according to Western and Hindu Traditions” based on the 4th International Bioethics, Multiculturalism and Religion workshop held in Mexico, 2014 on this topic.

UNESCO Chair fellow Fr. Joseph Tham chaired the session. The symposium hoped to stimulate dialogue among the different presenters, discussants and the audience through the moderation of the chair. This format allowed greater engagement between the audience and experts in the fields of religious ethics and human rights.  At each of the three presentations, the main presenter explained his or her paper, followed by the response of the discussants and eventually fielding questions from the audience. After the three presentations, the chair summarized the findings and opened up the discussion to the audience for further clarifications and debates.

Fr. Tham noticed that in the globalized reality, religions could play an essential role in health promotion. Article 14 of the UNESCO Declaration on Bioethics and Human Rights on Social Responsibility and Health states that “The promotion of health and social development for their people is a central purpose of governments that all sectors of society share… the enjoyment of the highest attainable standard of health is one of the fundamental rights of every human being…” The symposium focused on how this article is understood in the West, especially Christianity, and the East, represented by the “Hindu” tradition. The contrast and dialogue between these two time-honored traditions can shed light on the differences and convergence of theories, methodologies, and actions regarding social responsibility and health. In the West, this duty originated from the Good Samaritan question in the Gospel, “Who is thy neighbor?” This idea of supererogation—to act beyond the call of duty—is closest to the ideal of treating every stranger with equality and universality in the current milieu of global ethics and human rights. “Hindu” conceptions on social responsibility are based on the balance between the demands of karma and dharma found in Bhagavad Gita. Karma proposes a somewhat resigned acceptance on individual social status, condition, and fate.  In order to achieve the dharma in the social stages of life, individuals are inspired to serve and alleviate the social needs of the less fortunate. Ultimately, these social responsibilities arise from the spiritual discipline of self-perfection and virtuous living to attain liberation or moksha. Some of the concerns raised in these two traditions are 1) respective responsibilities of organized religion and state in healthcare provision. 2) the relationship between health-salvation at the physical and spiritual level. 3) the feasibility of egalitarian distribution of resources. 4) the language of duty vs. rights.

Fr. Sameer Advani, Research Scholar of the UNESCO Chair in Bioethics and Human Rights and professor at the Regina Apostolorum Pontifical Athenaeum presented his paper on “Christianity and the Asiatic religious worldview in the thought of Benedict XVI.” As one of the most recognized intellectuals in the West and as leader of the Catholic Church, Joseph Ratzinger/ Pope Benedict XVI was instrumental in shaping the debate on a wide array of public issues in the late 20th and early 21st century. Key to his approach was the conviction that humankind discovers truth through dialogue, and he was thus a staunch and tireless defender of the need for secular society to talk with religious traditions and for religions to converse among themselves. This paper introduces the symposium by examining Ratzinger’s proposal, highlighting his notion of religion as the ‘cumulative memory of mankind,’ its role in contributing to public debate, and the particular importance that the Christian and Hindu worldviews play in this process.

Colleen Gallagher, Chief of the Section of Integrated Ethics at Houston’s MD Anderson Cancer Center, spoke on the “Christian conception of Social Responsibility in Health.” Christianity interprets the parable of the Good Samaritan as Jesus’ command to see and care for the stranger in need as our neighbors, even beyond the call of duty. These are works of supererogation that overcome the Old Law of duty with the New Law of love. This understanding further develops into a comprehensive understanding of justice, responsibility, and rights to provide individual and community health needs as reflected in the substantial Catholic healthcare provisions globally. It coincides with the vision of Global health and social responsibility expressed in the UNESCO Declaration of Bioethics and Human Rights.

Dr. Vasantha Muthuswamy, President of FERCI and former Senior Deputy Director General of the Indian Council of Medical Research, explained to us “Hinduism and Social Responsibility.” Vedanta provides the code of conduct and spiritual values which fully anticipate socio-economic problems. It prescribes Dharma, the moral duty of each, and Karma, the line of selfless action to be undertaken without expecting any return. It provides the moral compass by cultivating family and social values to fulfill the social responsibilities towards the needy. Hindu ethics leads to self-realization or liberation from the cycle of birth and death, moksha, through service. The presentation will analyze the UNESCO Declaration through the lens of Hindu tenets that eventually form the guiding principles of the Indian Constitution of India which protects the fundamental rights of its citizens.

The Symposium was very engaging for the 30 or so persons who attended, and there are many interchanges regarding this fascinating intersection of religion, human rights, and social responsibility.