“Hypnosis and cognitive hypnotherapy. The hypnotic experience in psychotherapy and palliative care.”

Neurosciences’ field of action surprises in depth, involvement and extension, as evidenced during the Interdisciplinary Neuro-bioethics Research Group (GdN) last meeting, held last 9 February, having as its protagonist the hypnotic experience in psychotherapy and in the palliative care field.

Dr. Patrizio Borella, President of the Research Center for Clinical Psychology; dr. Costantino Casilli, Scientific Director of the four-year School of Specialization in “Cognitive Hypnotherapy” and, in closing, Dr. Maria Paola Brugnoli are the three voices that chaired the substantial discussion held last 9 February, entitled «Hypnosis and cognitive hypnotherapy. The hypnotic experience in psychotherapy and palliative care”. The meeting, organized by the Neuro-bioethics Research Group (GdN) of the Ateneo Pontificio Regina Apostolorum (APRA), introduced by the coordinator of the Group, F. Alberto Carrara, in collaboration with the UNESCO Chair in Bioethics and Human Rights and the Science and Faith Institute, aroused curiosity, stimulating medical, psychological, ethical and spiritual questions about the interaction between the hypnotic experience and the suffering person. 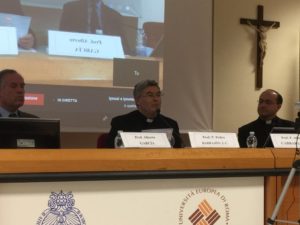 As emerged from the introductory notes of the study session, dictated by the reflections of the Rector of the European University of Rome, F. Pedro Barrajón, together with the Director of the UNESCO Chair in Bioethics and Human Rights, prof. Alberto García, the common impact, facing those who apply hypnotic techniques, is a widespread sense of fear typical of those who, for this therapeutic approach more than for others, feel not to fully understand its modalities and effects. Many people tend to generalize the mislead and distorted uses of hypnosis, combining them with a concession, a power conferred, or suffered, by the one that performs it, who deprives the patient of the full control over his person by entering, precisely for this reason, in his inner and more intimate part. This “resistance”, as rightly pointed out by prof. García, is often caused by a “to not know”, turned into a “to know to not know” during the experts’ reports. It is intuitive to legitimize such concerns if we lower this state of mind in the cultural “humus” and in the forma mentis of societies tightened in the grip of the necessary control over every element of one’s own existence; just as it is equally evident how the problem of the mistrust in the doctor-patient relationship, verifiable without difficulty, is amplified within a practice in which abandonment and presence coexist in such an intense manner.

Dr. Borella, describing modalities and curriculum of the four-year School of Specialization in “Cognitive Hypnotherapy” based in Florence, which is the unique school in Italy qualified to teach the cognitive hypno-therapeutic model, took care to remove some barriers, such as the media influence on the understanding of hypnotic therapy, considered just like the therapist’s passive conditioning on the patient, when instead the second one radically works on the interaction and his participatory presence in the investigation executed on himself; reason why the model taught in the Florentine School does not split theory and practice in two independent blocks. 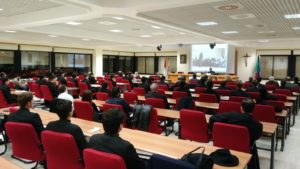 As underlined, relying on what he personally learned during his clinical experience, by the Scientific Director of the School, the specialist Costantino Casilli, it’s fundamental not to scientifically convince towards the hypnotic practice, but to move urged by the interest for the person and the absolute centrality that he occupies in this sector. The task of the hypnotist is to approach the person by understanding how this helpful relationship can be useful to the discomfort bore by the patient, on which one it is operated through the alteration of the states of consciousness (comparable to conditions of meditation or strong concentration), defined also “dis-perceptive phenomenon” or temporal suspension. Hypnotic induction can follow three distinct modalities: classical induction; imaginative techniques; Ericksonian techniques. The last of these different methodologies is the most functional, apt to guarantee an autonomous mastery to the patient on the path he performs together with the therapist.

This entourage, therefore, is different from the binomial order-execution, so much that it could be confirmed the guiding role of the patient on the orientation given to the therapist in the trance condition, which is already defined, adopting a broader view, the driving force that leads the patient to expose his inner conflict, by whom he is smothered, towards another human being, a stranger, who is dragged into spaces from which the patient himself is hiding. The examples of obsessive or phobic people, with whom hypnosis requires very accurate analysis, have shown the concern for the single problematic experience, adopted by a professional able to carry out an healthy work of discernment both on the patient’s structure and on his own, in order to remain firm in the privacy of a world in which he always enters as a guest. 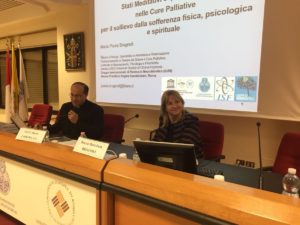 It has been highly involving and rich in bioethical references, the research lead for many years by the expert Dr. Brugnoli, palliativist, anesthesiologist-resuscitator, with a Ph.D. in Neurosciences and the GdN membership. What has been anticipated during the presentation, namely that the focal point of this round-table lies in the centrality of the person, finds here a very delicate sensitivity, both because of the “care provider-patient” interrelation existing in conditions in which pain, suffering are made more acute and unbearable, and because of the renewed awareness, the healthcare staff is called to make its own every day, to stop not at the feet of a pathology, but of a sick person, protected in the complexity of body, psychic and spiritual dimensions. Three components also affected by the torment of an unbearable evil: physical pain sometimes becomes psychosomatic suffering and this two drag the patient towards the question of meaning, raising it to meditative, spiritual places that offer unique experiences where the mystery of the human being could be approached. Many studies confirm the occurrence of identical brain reactions during hypnosis and meditative conditions, situations in which the brainwaves tend to progressively slow down; there is even the feeling that the brain, from a functional point of view, temporarily switches off, which is what we read in many religions in relation to mystical experiences. It provokes our intellect that the higher stages of inner awareness, the most beautiful mystical experiences, have occurred together with very slow brainwaves, perhaps because, like approaching death, they hide that feeling of the immortality that inhabits the soul.

Within this scenario, hypnosis propose itself as means of relief from agony over the usual remedies, and it is interesting how the study of the interaction between hypnosis and pain brings the attention on the unity-entirety of the person, including a body which, due to illness, no longer finds perfect correspondence in what its history narrates. For this reason, Dr. Brugnoli specified that hypnosis opens transversely to the spiritual dimension.

Pedro Barrajón, in his opening consideration, underlined the contact between science, technique, human intelligence and the service they grant in order to aid the human being, specifically the ability to tolerate pain, finding, during its happening, the finiteness itself of the creature; but, at the same time, the right of the individual to use ethically licit means to endure it and soothe it. Adopting this perspective, remaining loyal to the principle of precaution, hypnosis as “support for the physician”- as classified by Pope Pius XII – figures as soothing help for the person who suffers.

It would be simplistic to consider what the experts exposed as pure notion: there has been a central idea, from prof. García’s immediate appeal to the person, towards the origins of bioethics as a bridge between individual knowledge, never totally autonomous in the responsibility to which, together, they are called to account in their work. A super-structural perspective is given, beyond religions, beyond the cultural and philosophical differences, firm as it respects diversity: we have to listen to vulnerability, alarm bell of universal domain, reminder of humanity, aware that, even for those who feel themselves exhausted, fragility becomes nourishment, if it’s cared by charity.