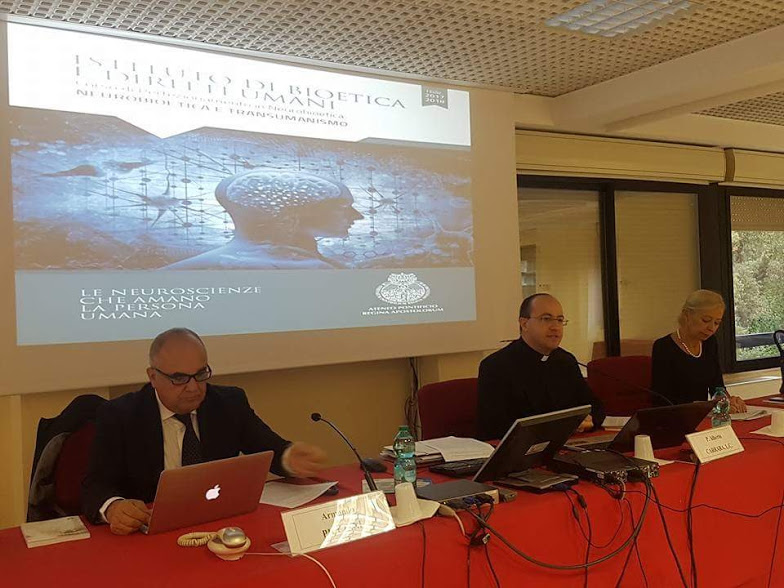 Through a dialogue between experts and in an open debate, the intervention of two well-known psychiatrists, professor Armando Piccinni and Dr. Donatella Marazziti, the numerous issues related to the so-called head transplantation attempted by the Turinese neuro-surgeon Sergio Canavero, were analyzed from a psychiatric perspective. Which possible scenarios can be hypothesized for a patient without a part of himself (or perhaps entirely himself)?

The first Masterclass in Neurobioethics, focused on the theme of Transhumanism, seeks to lead scholars and researchers to the essential questions that a world-wide event, such as the head transplantation, raises in the academic community and will potentially arouse throughout the world. Dr. Canavero’s challenge is not minimal: it concerns a “new humanism”, a revolutionary anthropology that derives from the exceptional nature of the intervention to the type of cultural movement that precedes and supports it, in other words Trans and Posthumanism where Transhumanism, as highlighted by the coordinator of the Masterclass F. Alberto Carrara, is the operative arm of Posthumanism, which is its speculative part in achieving immortality (through project “Heaven” and the brain transplantation into a robotic avatar). Evidently the trajectory followed by this use of the technique refers to the question of what is today the technique for mankind and in relation to mankind, concurrently with the doubt about the type of human being of which it will still be possible to speak and therefore, implicitly, about which kind of person we can speak today. Dr. Marazziti opened her report by entering the heart of this anthropological void, drawing attention to the great division opened by Descartes between physical and psychic reality, a distinction we are still paying for and which causes futuristic science to sometimes ignoring the person in his uniqueness and unity. Because of this, as briefly taken up by Carrara, we need interdisciplinarity to better frame the new challenges brought about by these currents: from the body as symbol of decadence, natural limit to be demolished, to the body as manageable inactive envelope; to the normalization of a thought on the body as manipulable object and therefore, ultimately, also modeled in the human-machine hybridization, until the dissociation between res cogitans and res extensa will be a substantial crack. The global scale of the phenomenon, due to its universal impact on each human being, is the appeal to which the UNESCO Chair of Bioethics and Human Rights also responded,.

Starting from these considerations, the speakers develop a fruitful exchange between questions and specific technical clarifications of the psychiatric sector that allow new details to be taken into account while reflecting on the action to carry out on the patient-person. For this reason, both experts refer to their clinical experience, a place where this essential union between the corporeal dimension and the psychic dimension is evident;  Marazziti encouraged those present to think of the depressed patient who faces a heavy body, feels his body. It is precisely this feeling of “being and having a body” that forms one of the fundamental mental constructs. Linking this, Piccinni stimulates the reasoning about the interference of the biological-genetic reflected entity, thanks to the epiphanic character of the body, on the outside, in the common practice of recognition (in relation to who will be the patient following the head transplantation –it is brought the example of the parents, or the grandparents, who seek in their children traits that refer to their origin, to themselves). “What will that man feel when he will take on a new body?” the professor asks himself; here the hindrance of the ego, of the de-personalization or de-realization, the cenestesis, comes back, as probable binding difficulty for that subject whose concept of himself will be de-constructed, compromised and changed.

The two speakers raise concerns not only on the suffering of the person; for them he will be plausibly affected by bodily dimorphism, due to the jamming of the feedback between the corporeal self and the inner self, but also because of the environmental conditioning, as well as the relational one: as social animals how will these hypothetical hybrids of two distinct, even historical, identities be recognized? Clearly, the weight of an existence subjected to such obstacles is massive; in fact, it must orient itself to the search for unexplored ways to experience deep emotions and to experience them; to translate sensations; to communicate; to respond to external misrecognition; to relocate consciousness, the self-awareness intrinsically linked to corporeity. Indeed, the conscience – citing Piccinni – has tormented us, modeled us, polished us, supported us since birth. What will become of the birth itself? Finally, the numerous dangers highlighted postponed the definitive question: which man? Also the fourth stage of this educational program stimulates the intellectual and personal curiosity, and the responsibility for the authentic use of freedom. Those that would be considered sci-fi attempts, have become close to reality (see the “European Civil Law Rules in Robotics”) and reality is not a niche, but it is global, since the extremely varied developments of these new technologies claim, at the beginning and in the end, a mature ethical discernment in the field of daily life. The Chair’s commitment, together with the academic research realities, is to train and sensitize with competence, to contrast normalization with critical thinking. On the other hand, any new humanism-beyond-mankind necessarily requires that we begin again from the man himself.