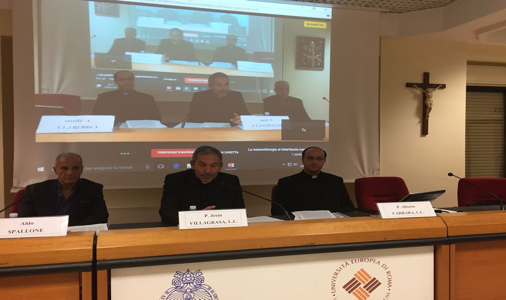 The first edition of the masterclass in Neurobioethics, “Neurobioethics and transhumanism”, fully entered the main problem addressed not only by the masterclass, but by all the research path that, during next five years, the interdisciplinary research group in Neurobioethics (GdN) will face, in other words the head transplantation and the effective opening of the Trans and Post-humanist panorama. The internationally renowned neurosurgeon, prof. Aldo Spallone, last November 24, outlined the clash-meeting between Neurosurgery and this so long-awaited event.

Thanks to the lecture given by the internationally renowned neurosurgeon, prof. Aldo Spallone, last 24 November, during the third meeting of the masterclass in Neurobioethics, “Neurobioethics and Transhumanism”, many participating scholars had access to the specific practice of this topic, actual core of what expected above and beyond neurosciences. Father Alberto Carrara, Coordinator of the GdN and of the masterclass, already prepared during the previous meetings a plot (scientific, philosophical and notional), updated to the most recent developments, about possibilities, expectations and goals of the Trans and Posthumanist movement. In accordance with the masterclass structure, in fact, the need is to show quantity and quality of the issues raised by this intervention, which will significantly result in new interdisciplinary answers, as well as in the first step towards an escalation predetermined by internal names of these two wellknown movements, Trans and Post-humanism. 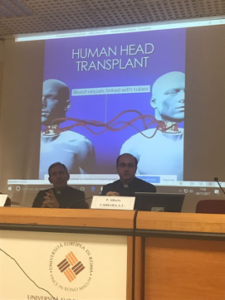 During the introductory presentation, the steps already taken during previous lessons has been recalled: the so-called head transplantation is close; probable and craved transhumanist goal, which stresses out the minds of those who are following its development. The whole philosophy from which Canavero’s experimentation originates, however, is the same which stands behind the famous “2045 Initiative”, whose cultural assumptions are strongly critical about contemporary society; reason why redemption has to come through a new kind of humanity, achievable during the era of digital immortality. Anxiety and hope are the two opposing reactions and perceptions generated by this future vision of humanity, who is tottering between her own improvement and the danger that, while trying to reach this improvement through the “Immortality Project”, she would no longer fully recognize her human nature, at the point to risk to lose it. The imminence of the problematic issues about objects of neuroethics interest (personal autonomy, privacy, subjective identity, rights and equality in the therapeutic field related to the costs that such interventions would require, etc..) is already an international political discussion item. 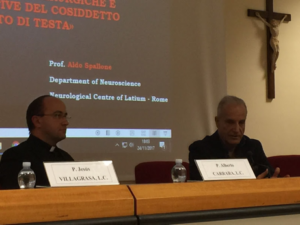 What explained by the esteemed neurosurgeon Aldo Spallone traces the academic and professional history of his colleague Canavero, pointing the link between his actual project “Heaven/Gemini”, in addition to his purpose, scheduled for 2020, to transplant a human brain into a machine (producing so a new humankind), and his concern, his particular awareness towards the issue of pain in the early days of his career, following the path which inspired his study of this issue. The Turinese neurosurgeon, along with his Chinese colleague Ren Xiaoting, proposes a series of “smoky” experiments, considered so by most of the scientific community, related in their technical aspect to standardized protocols, adopted without mitigating preexisting doubts about certain steps, such as for using the “sealant PEG”, whose function is to ensure the restoration of the integrity of the cutted nervous fiber; a technical device source of widespread skepticism. 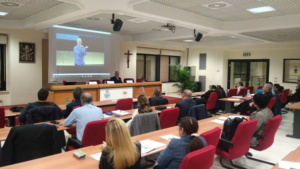 There are therefore some strong perplexities about timings of the attempt set for next 17th December: it seems that different personalities from the scientific community consider the attempt premature, particularly because of the problematic glitch that the connection between the two spinal marrows represents. Even admitting its success, there are three possible scenarios: the transplantion is successful, but the patient doesn’t regain consciousness; the patient regains consciousness, but it is unknown what will happen to the marrow (it’s an high section cervical transplantation where the survival rate on average is 4 years circa); head and spinal marrow work correctly and Canavero successfully reaches his goal (evidently the last two hypothesis feed cultural, legal, geopolitical, spiritual, philosophical, bioethical, etc… issues, the same analyzed during the masterclass). 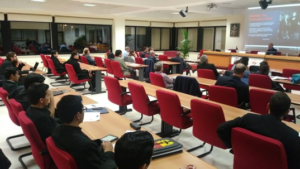 Clearly it is necessary, beyond the feasibility of the procedure, to dwell on “who” will be the “patient-hybrid” resulting from the procedure, main theme of the philosophical inquiry along with the purely bioethical consideration on the definitory frontier between health and disease, therapeutic and non-therapeutic, which additionally lies in the gap between Ren and Canavero, where the first one intends purely therapeutic purposes; the second instead publicly admitted his former support to the “2045 Initiative” or, in simple terms, intends to pursue immortality. How cleverly introduced by the Rector of the Pontifical Atheneum Regina Apostolorum, F. Jesús Villagrasa, and then recalled by the Director of the UNESCO Chair in Bioethics and Human Rights, the jurist Alberto García, the emergency engraved in these “radical medical interventions” would relapse on many fronts. Head transplantation specifically demands more careful sensitivities to the informed consent involved between the subjects, patients, each one coming from different and varied contexts (politically and culturally), suffering from serious and debilitating illnesses; therefore it becomes more urgent to take on responsibility, already fully accepted and exercised during the dialogue between many areas and sectors involved in the same conversation, if we consider it in light of the person, of her centrality and her human, ethical values, which affect and wholly define her; the same values recognized by law as a tool of safeguard and guarantee, which are enduring over the possible innovations, promoting a reflection on their own “ethicality”.

So the anthropological reflection on the integrity and the value of the person is the closest thing there is to the hypothetical goal of Sergio Canavero: the complexity of the head-body transplantation is not exclusively a purely practical complexity; we know in fact that before the doing, intended as “to able to do”, there is the analysis about the right for the person, that that possibility displays or not. “We are on a border (…) what is in the running, it may be too much»: consciousness, soul, identity are factors here called into question, subordinate to new languages following an intervention that would act on and for the suffering of a certain condition; but, doing this, it obviously affects the whole human being from whom no disease or dysfunction may be considered separate. Prof. Garcia highlights, integrating the anthropological structure of this issue, even the action of Governments and States, if Dr. Canavero’s challenge should gauarantee a success. We must not forget the social implications that require experts to recall the centrality of the human being and of human rights as core from which social ramifications depart and get more complicated. 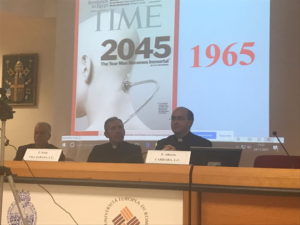 It’s fundamental to recompose the question about the purpose which leads to the use of human and material resources, in other words if the contribution to humanity have here a genuinely dystopian value, going to detriment of mankind while pushed from the power associated to progress, or if, on the other hand, it could be ethically thinkable (or even needed) such a medical intervention, in order to combine what presented and waited for the next December with medicine’s proper therapeutic vocation and with a research at the service of mankind, because she loves mankind. We need to discern the nature of the body-head transplantation with critical thinking. What was said during the third meeting of the first masterclass in Neurobioethics leads us to reevaluate the meaning of limit as an humankind distinctive element, in order to not run in the shadows of a new ethic of in-equality.