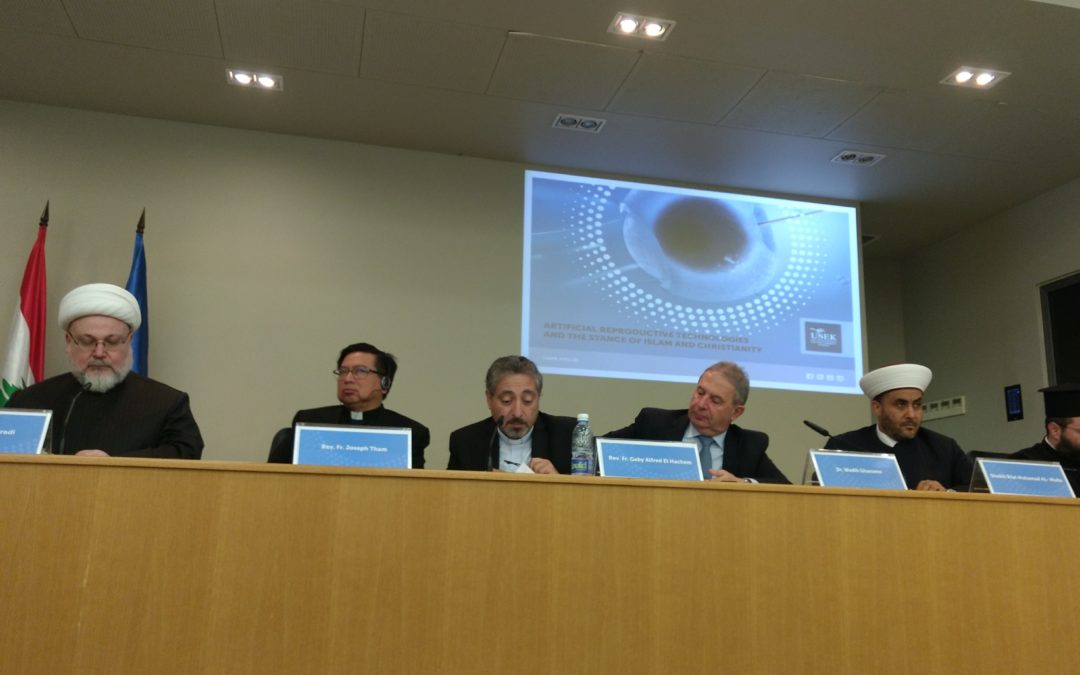 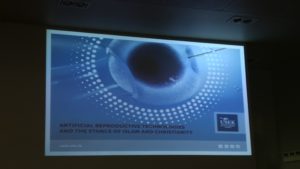 UNESCO Chair Fellow Joseph Tham presented a conference on “Scientific Approach and Ethics of Artificial Reproductive Technologies: Catholic Perspective” during the symposium “Artificial Reproductive Technologies and the Stance of Islam and Christianity” at the Holy Spirit University of Kaslik at Beirut, Lebanon on October 20, 2017. His presentation was part of the interreligious dialogue organized with the aid of the International Association for Ecumenism and Interreligious Dialogue. The event featured the Orthodox Christian, Sunni Muslim, and Shite Muslim perspectives on the theme of artificial reproductive technologies, thus reflecting the Chair’s ongoing commitment to themes of bioethics, multiculturalism, and religion. After the panel of experts outlined their tradition’s approach, university students joined various medical experts in an extended period of questions and answers dedicated to the ethical implications of the various technologies today available to assist reproduction. 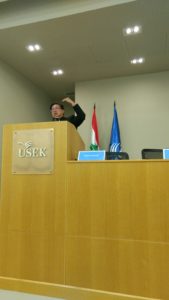 In his presentation, Tham insisted that the Catholic Church highly values natural human reason’s capacity to reflect upon the ethical implications of scientific developments. Thus, he focused his presentation upon a scientific exposition and philosophical analysis accessible to all men, regardless of religious affiliation or lack thereof. In addition to reviewing the different techniques of moving sperm, moving the egg, or moving both, Tham encouraged reflection on economic dimensions involved in the most commonly used approaches. For instance, in vitro fertilization costs clients roughly $10,000 for each attempt, with most couples requiring 3-5 attempts. What began as a technique to aid couples suffering infertility to have their own biological child is now sought by a wide array of clients, including single men, single women, same-sex couples, etc. Thus, there has arisen a veritable “baby business” that seeks to satisfy the demand for children from a diverse clientele.

Moreover, the development of prenatal genetic diagnosis has encouraged couples to pursue the “best” child possible in advance of birth. Some couples choose or are even compelled to select which embryos to preserve or destroy based upon sex or predisposition to genetic disease. The new CRISPR (Clustered Regularly Interspaced Short Palindromic Repeats) technology that emerged in 2015 may be employeed to change genes to form “better” children through genetic enhancement that would improve features such as height, strength, and intelligence. While the technology may provide laudable treatment for certain genetic irregularities, there are serious risks of abusing the medical breakthrough for eugenic purposes.

Tham reminded the audience that all present began as embryos and that those embryos manufactured in labs deserve the respect afforded persons. Each child successfully conceived through IVF normally entails the sacrifice of at least eight other embryos. In addition to altering the audience to the dangers of casting aside excess embryos, Tham recalled the right each embryo possesses to be born to his biological father and mother as the fruit of conjugal love. 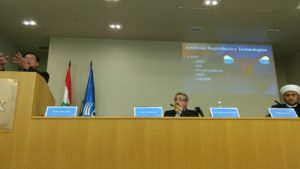 Tham recalled that the Church has no interest in halting the advance of science or of inflicting extra sorrow upon couples suffering infertility. He therefore concluded his critique of many of the more common artificial reproductive technologies with a positive proposal of the growing NaPro Technology. Tham briefly explained how this new approach born in the United States does not substitute the conjugal act of the couple, but rather assists said intimate act so that the couple can conceive their own child. The approach seeks to discover and treat the root causes of infertility and has a roughly %70 efficiently rate. Moreover, Tham presented the promising new technology as a healthier and safer alternative to techniques that often bring undesired negative side-effects for women subjected to them.