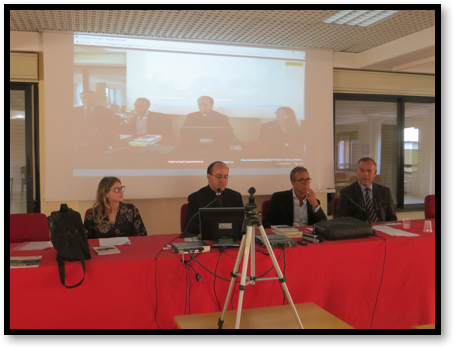 On the afternoon of Friday, 29 September, the opening lecture was held at the first Masterclass in Neurobioethics, “Neurobioethics and Transhumanism”, entitled “Post and Trans-Human: an Anthropological Question”. The whole program will devote its sessions to examine in depth the main theme, considering its interdisciplinarity as profitable. The beginning of the Masterclass laid the foundations for a quick confrontation current scientific issues, along with the ethical, anthropological questions that accompany them.

On Friday 29 September at 17:00, at the Aula Magna of the Ateneo Pontificio Regina Apostolorum (APRA), the first Masterclass in Neurobioethics, “Neurobioethics and Transhumanism”, was inaugurated through a roundtable discussion chaired by F. Alberto Carrara LC, Coordinator of the Masterclass, as well as of the Interdisciplinary Neurobioethics Research Group (GdN).

A first meeting titled “Post and Trans-Human: an Anthropological Question”, introduced by the Director of the UNESCO Chair in Bioethics and Human Rights, the Dr. Alberto García, who highlighted the nature of this academic initiative and, at the same time, the urgent need to restore, through this intricate link between technological and cultural innovation, a debate on the therapeutic value of applications and the highly debated subject such as human enhancement; a debate that requires the collaboration of various disciplines.

During the presentation of the Masterclass, organized in partnership with the UNESCO Chair and the Science and Faith Institute, three different experts addressed the audience: Dr. Claudio Bonito, through a speech entitled “Post-humanism: An Anthropological Question“, explained the human question facing Post-Human; coordinator Fr. Alberto Carrara LC, through a introductory overview on the “2045 Initiative: from the Trans-Human Body to Head Transplantation“; Dr. Giulia Bovassi, author of the book “The Echo of Solidity. The nostalgia of the recall between liquid anthropology and post-humanism” (IF PRESS, 2017), presented  a provocative reflection “How much is too much? The liquefaction of identity for the strength of many possible“.

The round-table seminar furnished criteria on the  direction to be undertaken (and kept) during the the Masterclass, and right now generally extended to the GdN activities. It also equipped the listeners with valuable ideas provided by the various disciplines involved, thanks to which it’s possible to move the first steps towards the “peak” of the expected and feared head transplantation (whose appointment is scheduled for next December); reaching then even higher peaks, such as the “2045 Initiative”.

From the very beginning, García highlighted the frailty of the challenges that have come to our attention related to the Post-Human and Trans-Humanmovement, particularly the therapeutic value of new technologies compared to enhancement (cognitive, motoric, emotional, ethical, aesthetic, etc…). “Human enhancement”, which raises questions of intentionality, and the purpose of human action in a dialogue between science, technology, reason and faith.

The prospect of the Post-Human questions the relationship between “normal” and “super-human”. What will be the link between trans-human and myself, “barely” human? What type of social coexistence will emerge  between super-humans and us? It’s clear the need to reflect upon human rights universal ethics. The UNESCO Chair continues to support the meeting of sometimes antithetical positions, through a work pursued for the common good, recalling dignity and fundamental respect for the person in its entirety, as in the subject of the “neurosciences that love the human person“. 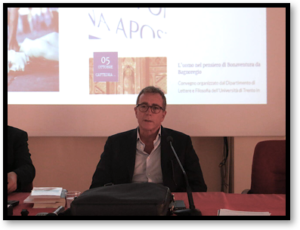 Bonito proposeed a philosophical specification of the theme, beginning from the post-humanist attempt to form a “new anthropology, whose origin is the lack of the solidity of all the concepts on which actual man and humanity definitions are based“. Many people took the potentialities to activate this anthropological revolution whose first stage was to make the man a subject to study and, then, to gather its finitude, condition to be overcome by decentralizing man. Technique fulfills this movement, that recalls the disagreement between natural and artificial, pushing mankind beyond, forcing them to re-define themselves. Post-Human and Trans-Human seek the improvement (even in evolutionary terms) and the overcoming of human constitution, limited by corporeality, an obstacle that science and technique can remove (enhancement; mind uploading; bionics, are examples). Here the technique’s approach to human nature becomes radical. As stressed by C. Bonito, while facing the issue, it occurs to avoid technophobic alarmism, considering also its positive implications, neither disregarding the historical relationship man has always fastened to technique, bearing in mind – using Monsignor Galantino words – that “through a dynamic philosophy of the existence the work of 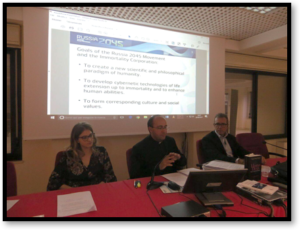 the intellectuals of our time can contribute to the surveillance of human being and to his custody“. By favoring the interdisciplinary methodology focused on the person’s wellness and striving for a contact as incisive as possible,Carrara deepened the scientific and practical aspects of post and trans-human theories, in a comprehensive overview of their positive and negative dimensions. In particular,he investigated the reasons for supporting the fact that the long-awaited good outcome of the so-called “head transplantation” would represent the first trans-humanist goal.

The dualism, nowadays dominant, between mind and body, radicalized in the imagination of disembodied minds, brings back the whole complex crux of personal identity. Through a rapid sequence of terminological clarification, the essence of trans-humanism is summarized as a “movement that wants man to take control of his own biological evolution through the use of technology“, represented into the myth of eternal life and immortality, whose rival is the intimate difficulty provoked by other’s death. The image used in the promotion of the “2045 Initiative” refers to fluidity, to movement, typical of post-humanist scenarios; it refers to the same historical phase from which post-humanism originated, in other words that period attracted by the overcoming of anthropocentrism, beyond therapy and beyond humanity.

The “2045 Initative”, taken as an emblematic case by Carrara, has been launched by Dimitry Istkov as the moment when “man will become immortal” gradually, crossing four Avatar phases over time. Everything was born out of the “technological overcoming” concept, theorized in 1965 by one of the greatest contemporary trans-humanists, Raymond Kurzweil, Google’s Director of Engineering, and which he sums up in “Singularity” (technological singularity). Dimitry Istkov founded a global trans-humanist movement, presenting in the United States a Russian project, he had already begun, to radically prolong/extend human life, progressively, up to the last step: transferring human mind, personality, into a substratum no longer perishable, so creating for mankind a new paradigm both scientific as philosophical, thus transforming social structures and society’s value system.

As announced by S. Canavero himself, head transplantation will not be the ultimate step of this climb to Trans-Human, but, once the intervention is successful, it will lead the experimentation of brain transplantation. The goal to overcome is the fragility of the body in its many manifestations, and it’s here that the “Echo of Solidity” comes into play. 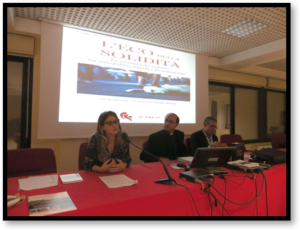 The author Bovassi, in introducing her book, aimed to give closure to what was previously presented: the text, in fact, comes back to malleable identity and to fluidity, intended as the preferable post-modern condition, the unique which can justify every push towards the “Beyond-man”, an evident tension into the overmentioned movements, taken as exalting examples from which, one can return to the question on our limits, finitude, suffering, death, and the human being.

What we said previously confirms the alienation from human centrality, exalted because of the totality of its nature, to its disengagement in available dimensions and, expendable or replaceable. Drawing inspiration from the concept of “liquid modernity” coined by Zygmunt Bauman, Bovassi refered to liquid anthropology as a search for improvement, overcoming of continuous, new possibilities, aimed at the point of turn themselves into the non-necessity of humankind, which is replaced by the superman’s myth.

Post and trans-human, undermining the fertility of suffering, according to Bovassi, entail the collapse of an already lost identity because they reject any identity determination. As Bovassi remarked, “The worst war we are suffering is against the right to be fragile again“. The equilibrium begins to react to the nostalgic appeal when it comes spontaneously to ask ourselves “how much is too much?“. 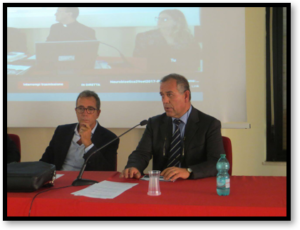 As stated by García, it is clarifying the fact that post and trans-human do not cultivate dystopian imagination relegated to a future poorly conceivable, they constitute instead – even more because of the expected head transplantation – the thundering appeal to experts, sensitive to the problem, in order that it can be given birth to a new research activity marked by the encounter of dissimilar voices, open to furnish a substantial scientific contribution, marked by a critical spirit and unanimous towards the essential respect for the human being, as core and goal.

The attention, expressed through the collaboration in the formative proposal in question, requires a dense answer to the rapid succession of new scenarios in which technology and humanity propose unusual features to their relationship. A technical-scientific possibility is never isolated if it is conducted by the man on the man, therefore it is essential to evaluate its intentionality, circumstances, consequences and ultimately its purpose, refining the gaze and the judgment, on the substance of actions guided by a distorted conception of “common good“, faithful to a new human profile for which the man himself must be lost, redeemed by mortality thanks to immortality incentives whose moves exclude the ethical demand of global breathing, entrusting harmony to a sort of technological abuse of power.

In the effective benefit and improvement generated by technique to humanity, today it is necessary to maintain the boundaries between lawful and possible, in order that man should not cause the decay of his own ontological superiority. It universally involves the responsibility of all men.