Hypnosis and Ericksonian Psychotherapy: from clinical medicine to neurosciences 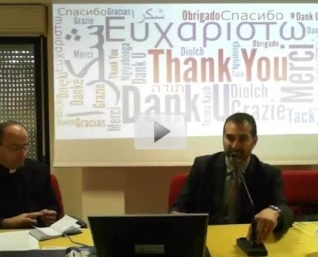 The Neurobioethics Research Group (GdN), during its latest meeting on May 26, hosted an interdisciplinary seminar about hypnosis, focusing on Milton H. Erickson’s method, father of modern hypnotherapy. The meeting was conducted by prof. Massimo Cotroneo, psychotherapist, and proposed a panoramic overview on techniques, starting from the common p.o.v. to its therapeutic application as recent subject matter of neurosciences’ research.

It has been an interesting meeting, the one proposed by the Neurobioethics Research Group (GdN) at the Ateneo Pontificio Regina Apostolorum (APRA), in partnership with the “UNESCO Chair of Bioethics and Human Rights” and the “Science and Faith Institute”, entitled “Hypnosis and Ericksonian Psychotherapy: from clinical medicine to neurosciences”; it focused on hypnosis, covering a brief historical panoramic overview, starting from practice (between esoteric cult and cliche) to clinical medicine, in its recent academic validation.

Hypnosis, from Greek hýpnos “drowsiness”, is a term referred to a particular state of consciousness, related to the intermediate condition between sleep and wakefulness. What we could see today is the appreciation of hypnosis, thanks to its arrival in the neuroscientific researches as therapeutic phenomenon, therefore as clinical application of a technique. From a scientific point of view, just from the beginning of 1900’s neurosciences started the clarification of the neurophysiological processes within hypnosis, debunking its mysteries, as a tribal-magic ritual, related to its application as an healing attempt of complex diseases, obtainable through altered state of consciousness focused on pain and autosuggestion. It has been a gradual process, which started from the stance of hypnosis as an occult technique, leading to the scientific investigation (permitted by modern diagnostic tools as EEG and fRMI) of cerebral modifications activated within the therapeutic session, where the patient is lead into an altered mental state (trance) by an external agent (therapist). Hypnosis experienced periods of trust and skepticism: turnover which lead to experimental approaches, which gained a sort of stability (still in gradual evolution) with Milton H. Erickson.

So Professor Cotroneo introduce us to Ericksonian hypnotherapy, one of the most accredited techniques today by clinical routine. The father of modern hypnosis conferred, through its theories (originated from its personal pain), a revolutionary turn to classical application of hypnotic trance, founded on a substantial “natural” approach to the patient’s altered state of consciousness, focusing on the uniqueness of the active subject, as well as on the compliance on a collaborative work between therapist and patient. Erickson talks about a “natural trance” as condition of common awareness, daily attainable, in contexts different from the clinical one, by everybody; contexts in which you can be particularly absorbed and disconnected from external reality, because of the maximal focus of your concentration on a thought, stimulated by different and temporary agents. What the Ericksonian theory brings us as an essential innovation is the qualitative depth of the therapeutic alliance as guarantee of the therapy’s benefit: preparing a context made of symmetry and elasticity, adaptable to the patient’s specificity, circled by an heterogeneous and unpredictable ground. The attention addressed to the communicating parts’ synergy is the strong point of modern hypnosis which, differently from its classical setting, supports a sort of comprehensive entourage of the person, whose difficulties are entrusted to the therapist, lowering the intimate protective defenses. Vice versa, before this “spontaneous” mark, the psychotherapy’s session blocked subject’s self-exploration, following the idea of a conditional difference between who holds the action “power” (therapist) and who must submit, so avoiding any patient’s possibility to lead the session. Massimo Cotroneo marked, in this sense, the peculiarity of inner-outer contact, habit of a communicative approach which, in trance condition, allows the patient to conduct a deepened work on himself; the patient, according to Ericksonian theory, is already owner of what is necessary to manage different situations, even if during the session he’s unconsciously guided to disassociative conditions. Hypnotherapy’s aim is to be able to lead the patient to reach the most hostile spots of his subconscious, rather the places where he’s not able by himself to arrive at: meanwhile traditional hypnosis focused its techniques on autosuggestion, addressing indiscriminate subjects, the ericksonian methods focus on the individual, highlighting the preparatory ability of the stage prior the trance condition (including verbal communication, non-verbal communication, behaviors, reactions); a “sowing” and “dissemination” moment  which channels the person to his problems.

Hypnosis is currently a highly plastic practice, exploited and exploitable in various fields, from the oriental/meditative to sport, until what stands at the therapeutic boundary, as dependencies, food problem, psychic conflicts, reaching anesthetic support to surgery in the end. Entered as neurosciences’ proper aim of the study, and consequently in clinical practice, hypnosis asks, as equal as other therapeutic modalities, to shed light on its relative bioethical issues. We must establish a sort of precautionary principle, especially regarding public reactions to hypnosis: as the professor emphasized during the seminar, historical roots of the hypnotic method are distant, both in time and in the technique’s contextual and constitutive nature; its incorporation as neuroscientific analysis is extremely recent instead, so potential patients risk a danger of an informational vacuum (often cause of strong perplexities) about the session they submit to. It’s common interest to strive in order that a rigorous and scientifically based interpretation of the technique is available to everyone, if it’s used with a therapeutic purpose in suitable places for this type of care path. Consistently with the mission of the UNESCO Chair in Bioethics and Human Rights, the systematic confrontation between experts contributes to a greater issue’s specification, so that the principles at stake can be safeguarded for the advantage, respect and dignity of the person. In this sense it will be essential to outline and transmit to the patients a vademecum that protects their integrity and privacy, whose control, in altered consciousness situations where the person concerned‘s exclusive property partially fails, is exposed and vulnerable. This is indispensable in order to stem a possible (improper) manipulation, conducted by the therapist (or the one who abusively self-certifies himself as therapist); manipulation that hampers free help demand. As raised at the end of the meeting, uncertain perspectives on the (long-term) consequences and the hypothesis of a future (if not experienced) use of hypnosis to enhance “standard” cognitive abilities are questions that reaffirm the necessity for an academic detailed study. On the other hand, a guided, scientific, and ethically correct use of this technique would be adequate to generate benefits even beyond the pure clinical place, such as for criminological investigations. Considering, furthermore, the safeguard of religious freedom, which may be uncomfortable with hypnotic practice in some worships, it’s even more prudent to have an informed consent to care, where there’s the best possible awareness that trance induction, as well as the driven self-reflection that follows the trance induction, are objective data, in order to overcome contrasts related to other spheres of application of hypnosis.

The ever-evolving investigation and the benefits disclosed until today by scientific publishing let  well hope that this technique, in particular in the modern ericksonian model, can offer additional help windows to the traditional psychotherapeutic practice, thanks also to the in-depth analysis provided by neurosciences.