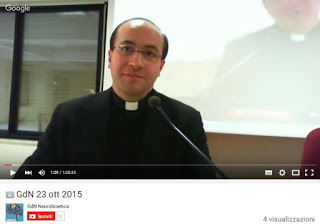 The Neurobioetics Research Group (Gruppo di Neurobioetica-GDN) opened its 7th year with its first meeting of the 2015-2016 school year on October 23, 2015. The meeting reviewed the many activities of the previous school year 2014-2015. In addition to the monthly workshop meetings, several members of the GdN participated in meetings and conferences at national and international level. The meeting can be seen online here. You can read the full report of the group here.

In addition to its work in Italy, the GdN has been involved at the international level, particularly with conferences in conventions, conferences and university courses in Mexico, Chile and Spain. GdN members also expect to work in in Portugal and Brazil in 2015-2016.

Furthermore, the GdN “twin” research group BINCA, founded a number of years ago in the Anáhuac University of Mexico City, continues its work in the country of Mexico.

The GdN will dedicate the year to exploring the nature, definition, and status of the field of “neuroesthetics” from an interdisciplinary perspective. In particular, the group is planning for its convention during the March 2016 Dana Foundation Brain Awareness Week, in cooperation with the S.I.S.P.I.(Scuola di Specializzazione con la Procedura Immaginativa).