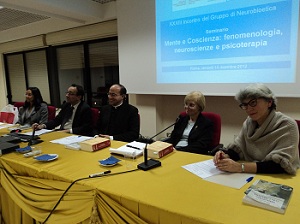 The XXXIII Meeting of the Group of Neurobioethics held a seminar on Friday, December 14, 2012 to address the theme “Mind and Consciousness: phenomenology, neuroscience and psychotherapy” In collaboration with: STOQ (Science Theology and the Ontological Quest), the Regina Apostolorum Faculty of Philosophy and the Regina Apostolorum Department of Bioethics. In his introduction to the seminar, Dr. Alberto Carrara, LC, explained that the theme is based on two texts: the first, entitled “… and Consciousness? Phenomenology, Psycho-pathology, and Neuroscience” by the first two speakers, Professor Angela Ales Bello and Professor Patricia Manganaro; the second text, “Imagination: care and creativity,” by the third speaker, Dr. Alberto Passerini. Video link of seminar

In her presentation entitled “Consciousness between Phenomenology and Sciences,” Professor Ales Bello stressed the openness of neuroscience to phenomenology, while noting the importance of maintaining the distinction between the competencies and methods of the two fields of study. The bridge between phenomenology and neuroscience is located in a deep analysis of human experiences. This approach can be situated in an anthropology that respects human duality without becoming dualistic in the reductionist sense.  In such anthropology, the human brain is not reduced to the sole source of human nature and its unique properties, but is nonetheless recognized as an authentic “base” of human nature´s expression.

Along the same lines, Professor Manganaro in her presentation entitled “Phenomenology beyond Neuroscience. A post-modern approach to the ´difficult problem´ of consciousness?” clarified that the epistemological problem in question involves the impossibility of explaining consciousness naturalistically. We must remember that the embodied situation of the human being means that in the explanation of the meaning of activity properly human, such as intellectual thought, exclusive reference to biological structures can provide a necessary, but not a sufficient account of these actions.

In the second part of the seminar, Dr. Passerini, in his presentation entitled “The Imaginative Experience, from Neuron to Psychotherapy,” explained a metapsychological tripartite body-mind-spirit anthropological vision that allows for a therapeutic approach that addresses man´s imagination. A deterministic conception of imagination has produced inadequate results, while mental images have shown an important causal role in affecting human behavior. The use of images to trigger complex responses is used in a clinical setting to access restricted areas of conflict and unconscious in order to produce a transformative movement and have therefore proven potentially therapeutic. In addition, knowledge of the neural basis of imaginative stimulation, allows new areas of research for a metapsychology of the image.

In the final presentation entitled “Towards a Tropology of the Mind,” Professor Valeria Chiore stressed the importance of the imaginative process in therapy by considering how the rhetoric figure of tropes may constitute a valid therapeutic system. The movement of the imagination has the ability to produce dynamic change in the subject that calls for further research.

A lively discussion followed the presentations.