Signing of an International Code of Ethics 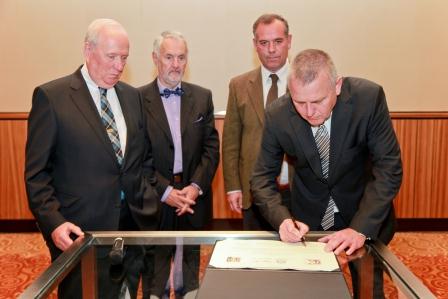 In accordance with the mission of creating an appropriate framework to guide the implementation of ethical principles, Professor Alberto Garcia, Director of the UNESCO Chair in Bioethics and Human Rights with its headquarter in Rome, Italy, has signed a document that guarantees an International Code of Ethics.This statement was taken up by two leading European research centers in adult stem cells: ITERA and ITERM. Both ITERM (Institute of Tissue Engineering and Regenerative Medicine) and ITERA (International Tissue Engineering Research Association) have proposed this international Code of Ethics for all institutions that are part of those agencies. This Code is in line with the Universal Declaration on Bioethics and Human Rights of UNESCO (2006).

Two events commemorated this signing.  The first event was held at the InterContinental Hotel in Düsseldorf (Germany) on November 19.  Mr. Thomas Nickel, deputy Mayor of the city of Neuss (Germany) which houses the Headquarters of ITERM witnessed the signing ceremony.

The second event took place two days later during the 5th Workshop of ITERA at the Kasteel Vaeshartelt in Maastricht (The Netherlands). In both sessions, Prof. Alberto Garcia spoke about social and ethical perspectives on the promises and dilemmas of regenerative medicine in legal context.