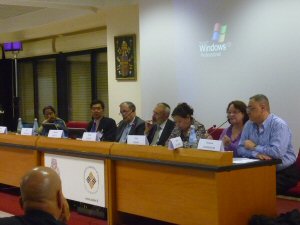 Who are the vulnerable?  What are the proper attitudes and responses toward them, especially in the field of biomedicine?

These were the questions discussed at a recent workshop held in Rome from October 9-11, with experts hailing from six world religions—Buddhism, Christianity, Confucianism, Hinduism, Islam, and Judaism.  This was a follow-up to similar conferences held in Jerusalem two years ago organized by the UNESCO Chair in Bioethics and Human Rights.

The Principle of Vulnerability in the UNESCO Declaration

Protection of human vulnerability and personal integrity was promulgated in a 2005 UNESCO Declaration on Bioethics and Human Rights.  However, as Fr. Gonzalo Miranda, LC notes, UN agencies in general do not take into account religious perspectives; even though they recognize that a great number of the world’s population is affiliated with some religious traditions.   Fr. Miranda represented the Holy See in the UNESCO during these meetings leading up to the Declaration.  The Spaniard spoke at the workshop about how the principle of vulnerability passed almost without any major debate among the delegates.

Prof. Henk ten Have who headed this UNESCO effort at the time explained that vulnerability is a new concept in bioethics.  As in any international document, they shied away from controversial terms such as “person” or “justice”.  Nonetheless, vulnerability applies not only to individuals but to families and other stigmatized groups, communities and populations.  There are certain circumstances which renders individuals and groups vulnerable.

A particular focus of this conference was the religious and cultural understanding of vulnerability in bioethics.   Sixteen speakers hailing from China, France, India, Israel, Italy, Mexico, Palestine, Spain, Switzerland, Thailand and USA presented papers on how their traditions offer support and protections to vulnerable groups, especially children before and after birth, women, the handicapped and the elderly.

It was clear from the beginning that with so many different religious traditions, and traditions within each tradition, many conceptual problems with vulnerability were raised.  The East-West contrast made discussion very interesting, and at times heated.  For instance, according to Buddhism, vulnerability is not something negative, but a fact of life. 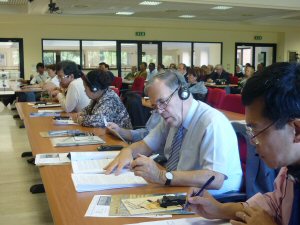 There are, however, certain trends that can be detected across the board.  There isrecognition of our human condition with its limitations that calls for a response in all religions, albeit with different names: Mercy (hesed) in Judaism, Agape for Christians, Humaneness (ren) in Confucianism, and Compassion in Buddhism, etc.

At the same time, many participants of the workshop find the formulation of vulnerability based on the human rights language too individualistic.  This is somewhat foreign to major religions where the self does not exist in isolation, but is normally immersed in a web of relations—family, friends, religious community, and society.

The emphasis on those who are vulnerable demanding their rights to be protected or given special attention is critiqued as predominantly a Western liberal ideal, which in bioethics is translated to mean patient autonomy and free choice.  In contrast, Confucians place more emphasis on family decisions.  This is echoed in different ways in Hinduism, Islam and Judaism which speaks more of duties than rights towards the weak and underprivileged.  All three branches of Christianity represented at the workshop were not totally comfortable with the liberal exaltation of subjective individualism.

This is not to say that individual rights are unimportant.  In today’s democratic societies, laws have been drafted to protect individuals and communities against slavery, discrimination, torture or genocide.  Yet, there are enormous challenges for these age-old cultures as they catches up to modernity.  For instance, India needed to forego the caste system as unjust and discriminatory, even though this has been ingrained in millennium-long tradition of Hinduism.  Islamic traditions of laws and customs derived from Koranic revelation is at time at odds with international standards on issues such as the status of women or female circumcision.  Christianity has been confronting modernity for the last few centuries in the process called secularization.  While there are definite traces of Judeo-Christian influence in the genesis of human rights, there is palpable unease to include abortion and same-sex marriage as part of these rights.

By gathering experts from these religions, a rare space of dialogue has been created where an atmosphere of friendship and respect reigns.   As Catholics, the encyclical Caritas in Veritate offers us some indications on how to engage in interreligious dialogue to promote peaceful co-existence and solidarity, while avoiding the danger of cultural relativism or eclecticism (§ 26).

Such dialogue and encounters allow us to see the other as our brothers and sisters in our common humanity.   This is more urgent in our globalized reality, and can eliminate suspicions that are sometimes causes of distrust and even violence.