The Ultrabody. Psychoanalysis, bodies and biotechnology 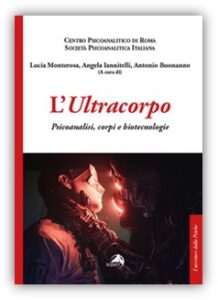 The Neurobioethics Group of study, presents the volume “The Ultrabody. Psychoanalysis, bodies and biotechnology.” Speakers: Lucia Monterosa and Angela Iannitelli. The event will include an introduction by Prof. Fr. Alberto Carrara, LC and the two interventions of:

The seminar will explore some aspects of the volume L’Ultracorpo, the result of the work of the conference organized by the Centro Psicoanalitico di Roma (CPdR) held on March 18, 2018. The back cover of the volume presents it in these terms: Our era is characterized by the uncontrolled expansion of technology that seems able to cross all boundaries, almost to the point of controlling life and expelling the fragility and disease of the body. As a result, we are witnessing the creation of ever new forms of “transhuman hybridizations”. Through the new biotechnology, genetic engineering, surgery, and everything that falls within the broad spectrum of “neuroscience”, the psyche / soma is acquiring the function of a container of new discoveries, a territory in which cohabit the living and the machine. These hybridizations transform the conception of life and enter the analysis room where “new patients” arrive, bearers of configurations of the psyche/soma in which the unconscious joins technological contaminations. In this excess of body – “The Ultrabody” – in which the vital dictation is linked to the “brutal” functioning of devices, the psychoanalyst probably needs to draw new maps of orientation. Yet, immersed in the current pandemic, man’s destiny reveals itself mercilessly. Death as part and lot of life shows itself inevitable as a universal figure of the human.

Link to the event: